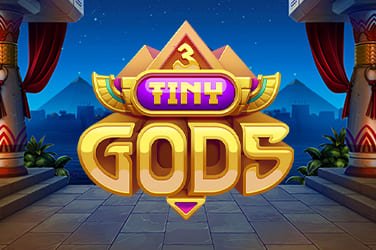 Powered by Microgaming partner Foxium, the 3 Tiny Gods Slot Game is a five-reel slot with 30 active paylines. The game has an Ancient Egypt theme and offers the chance to win prizes worth up to 5,000 times your total stake. There are plenty of innovative bonus features to enjoy throughout the gameplay experience, with three-reel modifiers, three jackpots and a free spins round n offer.

With a Return to Player (RTP) of 96.40%, the 3 Tiny Gods Slot Game is considered a medium to high volatility slot.

The 3 Tiny Gods Slot Game’s design is impressive, with high-quality graphics and a clean, polished overall look. The transparent reels are set against the dark sky background, with a pyramid just visible behind the haze. Columns with various Egyptian hieroglyphics scribed into them sit on either side of the reels. The accompanying soundtrack further enhances the theming.

The delightful theming continues with the game’s symbols, including lower-paying playing card suits – clubs, diamonds, hearts and spades – though in a colourful gem form. The more rewarding symbols are theme-specific and include Cleopatra, Horus, a Bastet, an Anubis, and the Pharaoh himself. The latter is the most rewarding of the standard set, offering payouts worth up to 20 times your total stake if you manage to land a full-house of five across any active payline.

The golden wild symbol trumps all other symbols and offers the biggest rewards of all. It can appear on all five reels, and if you manage to land a combination of five golden wilds, you’ll fill up your prize pot with winnings worth 100 times your stake. This golden wild can also substitute for all other standard symbols, helping to maximise your winning potential.

There’s the chance to trigger two reel modifiers during the base game – Mystery of Horus and Gift of Bastet – and a third can be activated during the free spins bonus round – Wrath of Anubis. When triggered, the screen will begin to shake. The Mystery of Horus modifier will transform symbols across two or three reels into the same symbol, whilst the Gift of Bastet bonus will turn a non-winning spin into a win. The Wrath of Anubis modifier will remove the lowest-value symbol from the reels during the free spins round.

The free spins round itself is activated by landing three scatters on the first, third and fifth reels, and rewards an initial eight free spins, though there’s the potential to be rewarded with more throughout the round.

The jackpot feature can be randomly triggered throughout the base game, resulting in several coins appearing on screen on one of the symbols. Once you’ve collected enough symbols, you’ll be able to scratch them off. If you reveal three matching symbols, you’ll be rewarded with one of three jackpots – the Mini, Midi or Maxi jackpots. They are worth 15, 100, and 5,000 times your stake, respectively.

The 3 Tiny Gods Slot Game is an entertaining slot with a great selection of reel modifiers on offer. There’s potential to land significant wins through both the base game and the free spins bonus round, as well as by triggering the impressive jackpot feature. The theming is superb, and the animations throughout the game are smooth. Overall, this is a fantastic, fast-paced slot.