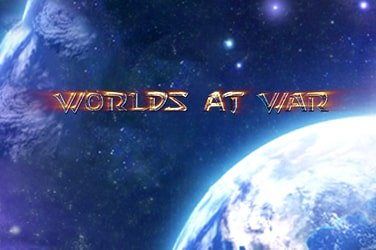 Free spins and an interactive bonus feature will have Casino77 members wanting to win the fight in this Worlds at War slot game from Genii.

Worlds at War slot game is a top title from Genii that has managed to provide players with an exceptional visual experience and one whereby individuals will feel as though they are up in space and fighting against each other.

The game’s setting and background depict a vibrant universe where there is a clash of colours, whilst the stars shine brightly. The game has a traditional playing grid format as there are 5 reels and 3 rows available, although the reels are transparent and help to bring the theme to life as the universe shines through.

Spins can be made from $/€/£0.01 per spin when all of the settings have been reduced to their bare minimum, however if players want to place a maximum bet and have all 15 paylines available, then they can place a wager of $/€/£18.75 on each spin that they make.

During this Worlds at War review, a quick look at the paytable of this Genii title revealed that the space theme had been followed expertly well as a number of symbols could easily be associated with it.

Stinger, the Hive Ship, Cyclone, the Star Station, Crawler, Wasp, Trooper and Aileron can each be found, whilst the two planets (Nibiru and Earth) are the most valuable regular pay icons that can be collected and used to form a winning sequence.

A host of Worlds at War bonuses are available to trigger in this game, with a couple of special icons available to collect and activate each one.

Starting off with one of the more common World at War bonuses, Commander Griffin is the game’s wild and he can help to replace symbols to form additional winning combinations. If he does this, he will double any of those that have been made, as well! Additionally, he would also provide a reward of 10,000x the bet if five appear on an active payline!

Another Worlds at War bonus is activated by the Demonion symbol and this is just one of two scatters that are available in this game. Those that land this one 3 or more times will receive access to the free spins game. A minimum of 5 free spins will be awarded, although 4 or 5 scatters will provide 7 or 10 free spins respectively. It can also be re-activated if he appears three or more times during the feature, as well.

The final of the Worlds at War bonuses available is via the second scatter, which is the Galaxy Gate icon. Again, this will need to appear on the reels in three or more positions on a single spin to activate the ‘Planetary Defence’ bonus. Players who trigger this bonus will go to a new screen where they will see alien ships flying around that they will need to shoot down. There are four waves and the more ships hit, the bigger the reward available at the end of the round!

Unfortunately, we found during this Worlds at War slot review that the return to player (RTP) rate has not been disclosed. However, we can reveal that this title does come with a medium variance level.

Genii’s Worlds at War slot game is an amazing slot game that will provide Casino77 players with an incredible experience and one that is just as potentially rewarding as it is enjoyable! Play it here now!

We have a world of slots if you want to try other titles such as Turning Totems, Bun in the Oven, Squeaky Blinders and Slice and Dice.