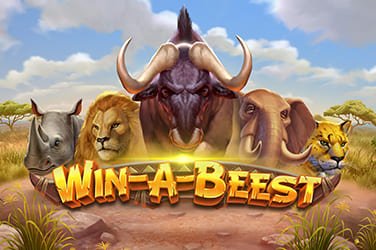 There are plenty of animal-themed slots to choose from, and many of those are set on the African savannahs, where the Lions and Elephants roam placidly in their natural habitat. Not in this slot!

Win-A-Beest showcases the less calm and contented side of wildlife as hordes of massive Wildebeest threaten to trample all over your lovely reels at any moment! It’s a dangerous road to travel, but could there be gold among the trampling hooves and snorting? Let’s take a look at our Win-A-Beest slot game review.

Did you know that the Hippopotamus is more dangerous than the Lion in Africa in terms of the number of people injured every year? You have to watch out for the quiet ones, and that’s definitely the case with this massive horned creature the Win-A-Beest, who stomps about the grasslands of Africa squishing anything in its path. The game looks great, and from the golden sunset over the Savannah that fills the background to the angry looking animals on the reels, there are plenty of excellent graphics to admire. The animations and sound effects are also great, with herds of wildebeest roaring across the reels, the snorting face of the Win-A-Beest glaring out of its symbol and flashing, spinning symbols as you generate wins. The music isn’t very African, but it’s certainly exciting and sets a very tense mood.

Win-A-Beest is one of those exciting slots that expands as you play, so while you start out with a solid 256 ways to win you may notice that some of the spaces are blocked out with wooden panels that look nice and breakable. The game doesn’t expand until the bonus features when you can get up to 1024 ways to win, but with a maximum bet of £/€/$100 and an RTP of 96.12%, the 256 ways that you start with is more than enough to generate some tasty wins. The payouts themselves look a little on the low side when you first see them, with the highest symbol represented by the Win-A-Beest bagging you just 5x your wager, but this game has ways of boosting your prize.

Win-A-Beest is a high variance slot, and the features are the main reason for that, granting you the ability to send those small winning totals haywire at any moment. For a start, this game has two types of wilds, one of which doubles all wins made using them. Second; ‘Beest’ Mode can activate at random, and this feature not only expands the reels to their full 1,024 ways to win glory, but it also replaces all low-value symbols with special symbols including the two wilds and the scatter. Beest Mode Spins is very similar and activated by landing three scatters, basically giving you all the benefits of Beest Mode but with up to 8 spins you don’t have to pay for. The three scatters can also activate the second version of Beest Mode called Stampeding Spins, heralded by a herd of wildebeest rushing across the reels, which includes up to 20 free spins. The best part of all of this is that each mode can be activated within one of the other modes, so you can end up playing feature after feature over and over again if you’re lucky.

The Win-A-Beest slot game is a truly wild animal, seeming tame and peaceful at times before truly unleashing its potential. This game can go mad in a heartbeat, turning a row of losses into a massive win including multipliers, free spins and instant wins, and it helps that the game looks great while it does all of this, boasting excellent graphics and some fun animations.