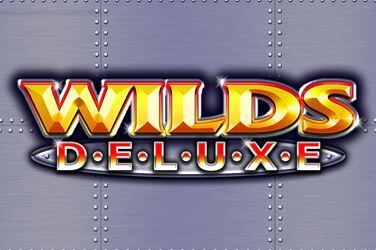 While sometimes it’s nice to play a slot that’s been finely constructed with an amazing looking theme, well thought out symbols and an engaging narrative, sometimes it’s just nice to have a pop at winning loads of money.

If that’s more your style, the Wilds Deluxe is the game for you, because it’s got money on the brain! Ban vaults stuffed with cash, jewels and precious stones are the order of the day, and if you’d like to own some of that then you had better play the game and hope you spin well! Let’s take a look in our Wilds Deluxe slot game review.

There’s nothing subtle about the imagery in Wilds Deluxe, and if you ever forget why it is you play slots in the first place, there’s plenty here to remind you. All of the symbols are unique and include gems of various colours as well as stacks of gold bars and boxes overflowing with pearls and precious jewellery. Let’s not forget the famous wilds from the title, which are represented by solid grey safes with a multiplier in bold text on the front. It’s all very bold and brash, though there’s something a bit dated about all the bright colours and simplistic textures compared with more modern slots.

There’s nothing subtle about the way this game plays either, with very little in the way of surprises to get between you and the cash. There are five reels and three rows, while there are ten fixed pay lines to play on, and the maximum bet is £/€/$50. You can also win both ways, which doesn’t make a massive difference, but it’s a nice little bonus on top of your existing wins. Not enough to get pulses racing, but certainly enough to make some decent wins. That’s especially true when you factor in the top prize, which is 2500x your bet for five diamonds, a respectable figure in any slot game. That explains why the RTP is a solid 96%!

There are no bonus rounds as such in the main game, but the presence of the stacked wilds is more than enough to compensate. The safe symbol can land stacked anywhere on the reels any payout, but when it lands on the middle reel it opens to reveal a random multiplier up to 7x on the inside. Each of the multipliers revealed is then applied to any wins you make on the spin where the safes landed, which can be quite a large amount of money if you’re lucky. There’s also a special feature that shakes even more safe wilds onto the screen randomly if your reels are looking a bit empty, so you don’t always have to wait too long for a healthy number of safes to play with.

The Wilds Deluxe slot game is about as delicate as a brick wall, but if what you’re looking for is some nice hefty payouts and plenty of reel spinning action then you’ve come to the right place. There’s little in the way of pretty visuals, and there’s not even a bonus game, but those stacked wilds and those diamond symbols just pay so well that you won’t even notice!