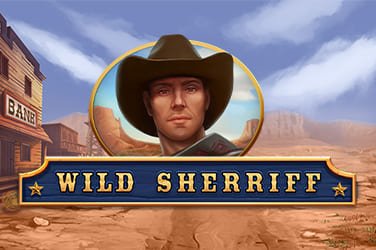 It is time to govern the Wild West in this Wild Sheriff slot game and the use of free spins and additional wilds will certainly make it a rewarding experience for Casino77 players!

Provided by Cayetano Gaming, Wild Sheriff is an excellent slot game that provides a brilliant visual experience and one that many will be able to fully immerse themselves in when they play at Casino77.

The game, perhaps unsurprisingly given its name, follows a theme that takes inspiration from the Wild West, although there is an element of light-heartedness to it as the graphics and imagery provided are of a rather fun nature. The game has a background setting that shows it to be played out in the desert, whilst there is a cowboy standing by the typical wooden building that can be found, with the playing grid being housed on it.

The playing grid of this Wild Sheriff slot consists of a regular layout, as there are 5 reels and 3 rows in which the icons available appear, as well as a total of 20 fixed paylines with each spin that is made. This Wild Sheriff review found that spinning the reels can cost a minimum of $/€/£0.20 or they can cost a maximum of $/€/£2,000!

When taking a look at the paytable during this Wild Sheriff review, it became evident that there are a number of symbols available to collect and form winning combinations.

The icons include things such as the standard traditional playing card values, but they are then followed by objects that can be associated with the game’s theme. Items such as a harmonica, a horseshoe, a revolver, a bag of gold and the Sheriff’s star are all included.

The first of the Wild Sheriff bonuses available in this slot from Cayetano Gaming is via the game’s wild symbol, which is the Sheriff himself. This icon has the ability to substitute for all regular icons on the playing grid when he appears and can help to form additional win rewards. Furthermore, the Sheriff also has the potential to expand when he appears, thus making the win potential even greater than before!

Another of the Wild Sheriff bonuses is the free spins game and this can be triggered when players land 3 or more of the ‘FREE SPINS’ symbols in any position on the board. Those that manage to land at least 3 of these scatters will be awarded with a random number of free spins, with up to 20 possible. Each and every win achieved in this bonus will be doubled, whilst the round can be re-triggered.

Lastly, the final Wild Sheriff bonus is the Wild Shots feature, which will see the Sheriff start shooting at the playing grid. When he does this, up to five wilds will be added to the reels before he turns into an expanded wild across the three middle reels.

Indeed, it is clear that this Wild Sheriff slot game from Cayetano Gaming needs to be enjoyed, as players at Casino77 will be able to experience a quality title that can make their lives rather rewarding.

The addition of the Wild Sheriff bonuses is a great touch, whilst the graphics and visuals provided will have players feeling as though they can truly get involved in the action that takes place and shouting “Yee-Haw!”.

If you’re looking for a wild time, you could try out these titles Queen of the Crystal Rays, Banana Odyssey, Aurora Wilds and Boom Pirates.