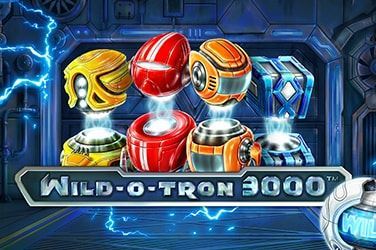 There are many old school games and toys that millions upon millions of children revert back to with a great sense of fond nostalgia, and that’s especially true for the Transformers era.

In NetEnt’s Wild-O-Tron 3000 slot game that we’re going to review today, they take that concept and, pardon the pun, transform it into something entirely fresh and unique. Buckle up, because this slot is a real throwback.

The basis of the Wild-O-Tron 3000 slot game is simple and to the point with a 5×3 reel layout that gives all of the symbols in question time to shine and flourish within this mechanical setup. There are 20 fixed paylines to work your way through and from a playability standpoint, it seems to run quite smoothly based on our first impressions.

With a not-so-subtle nod to the WALL-E movie, it’s clear to see that the gritty design of the lowest-valued robot is used to build nicely to the other coloured symbols that appear with seven different robots being visible, including the most valuable which is the red robot.

The return to player percentage (RTP) is an integral piece of any slot operation and the same is true for NetEnt’s Wild-O-Tron slot game. It can make or break the gaming experience for the majority of players and in this instance, the final figure of 96.01% can be viewed as slightly above the standard industry average. With the volatility being rated as medium, there’s the possibility of a steady stream of payouts.

Those of you who would prefer to be a bit more conservative with your money can kick things off with a minimum wager of $/€/£0.20, whereas the high rollers can put down a fee as high as $/€/£200. With the potential to win upwards of 500x your initial stake, there’s clearly a lot to like about what the Wild-O-Tron 3000 slot game has to offer.

Both the design work and the soundtrack assists Wild-O-Tron 3000 in giving off the workshop vibe that adds the gritty, somewhat nerdy vibe that this particular slot thrives off of.

The round-shaped object with a blue ‘W’ in the middle of it serves as the wild symbol of the game that can substitute itself for any and all other symbols. Plus, in the Wild-O-Tron bonus feature, between one and six robots can transform into wilds – offering up all kinds of financial opportunities.

The Wild-O-Tron 3000 slot game sticks to a basic set of slot principles, has a decent financial upside, and is pretty easy to follow. The structure ensures that just about anyone from a beginner to a veteran can follow along and give it a go, and while it may not take enough risks to appease those who want to live on the wild side, that doesn’t mean it isn’t still fun and effective.