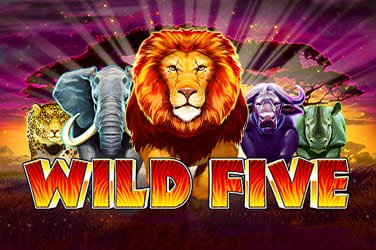 Developed by Skywind Group, the Wild Five Slot Game features five reels, four rows and 50 paylines. There’s a maximum win worth 1,970 times your stake up for grabs on a single spin. The design is fully optimised, so you can enjoy a seamless gameplay experience across all devices, including touchscreen tablets and smartphones alongside laptops and desktop PCs.

With a Return to Player (RTP) of 96.04%, the Wild Five Slot Game is considered a high volatility game.

The Wild Five Slot Game transports you on a journey to Africa to seek out the ‘big five’ – the lion, leopard, rhino, elephant and buffalo. Behind the reels, you’ll find a stunning landscape, with grassy plains and a blue sky. The African-style soundtrack helps immerse you in the game’s theme and works well.

The Wild Five Slot Game’s minimum bet sits at $/€/£0.50 per spin, with the highest possible wager limited to $/€/£250.00 This generous upper bet limit and relatively low minimum stake allow all players to enjoy the game, including both low and high rollers.

The Wild Five Slot Game has just one main bonus feature – the free spins round. However, it’s an interesting interpretation of a free spins round, offering various levels with different rewards.

Trigger the free spins round by landing three or more acacia tree symbols in any position across the reels. You’ll receive an impressive 100 times your stake as an instant reward, plus 15 free spins. You’ll begin at level one but can advance all the way to level six to transform symbols into higher paying counterparts, as follows:

It’s not possible to retrigger the feature, but by moving through the levels you can expect some serious winnings to be added to your prize pot.

The Wild Five Slot Game is a superb slot with excellent graphics and a strong theme. Though it’s not packed with bonus features, the free spins bonus round is unique in its approach, and we love the inclusion of the different levels, which heighten the excitement throughout the round. Overall, this is a great game, and both low and high rollers will enjoy taking it for a spin.

If you like this slot, you might also go wild for Genie Wild, King Kong Fury, Golden Mane and Wai-Kiki.