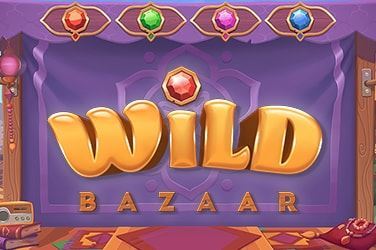 The Wild Bazaar slot game from NetEnt pays tribute to the exotic, colourful and generally delightful culture around bazaars. They can be seen across a few different continents in a range of different settings, and in this instance, they’ve been transformed to make an enjoyable gaming experience for all.

Today, we’re going to see whether or not NetEnt has been able to do justice to them.

The standard 5×3 reel layout is in operation for the Wild Bazaar slot game that sets the scene perfectly from the moment you open it up and start playing. There are 26 fixed paylines to work your way through, but as you can probably imagine, that doesn’t even come close to telling the full story.

The shiny trinkets and treasure chests make up the core of the symbols in the game with each and every colour representing a different value for you to exploit.

The return to player (RTP) percentage isn’t always going to serve as the most appealing aspect of a slot game, and more often than not, it can actually detract from the enjoyable experience of opening up a game without knowing what you’re in for. Alas, the Wild Bazaar slot game can’t escape its importance, with the reported RTP coming in at 96.15% – which should be viewed as slightly above average in the grand scheme of things. With the volatility being set at low to medium, punters can also expect a slower stream of financial returns with high rollers potentially being left feeling a bit frustrated.

That doesn’t mean you can’t give Wild Bazaar slot an honest go, however, as players can put down a stake as low as $/€/£0.20 and potentially as high as $/€/£400 depending on how fruity you’re feeling. Oh, and you can also take home 390x your initial stake, too.

From the fast-paced soundtrack to the details lying within the animation, we have to say that the theming here really does capture the imagination of the audience in a way that so many other slot providers fail to do.

The bonus games aren’t exactly in short supply, either, with the following features being there for all to enjoy: Stacked Wilds, Colossal Wilds, x2 Multiplier Wilds and Linked Wilds with all offering up the chance to build some real momentum.

The Wild Bazaar slot game gives players a vibrant and in-depth look into something entirely different to what they’re used to, and it also represents a departure from the standard themes that we’ve come to expect from slot providers.

Players may have to be patient if they’re eager to try and win the big bucks but that doesn’t necessarily mean they’re going to wind up being disappointed. The best thing that can be said for NetEnt here is that they’ve created a product that is repetitive, and in its own right, that is going to ensure healthy longevity for Wild Bazaar and those who remain loyal to the theming.