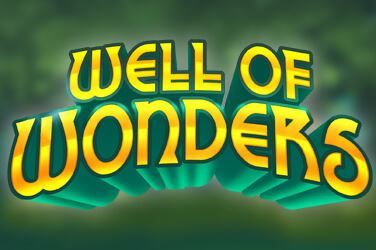 Well of Wonders is the perfect game for players who aren’t necessarily looking to break the bank, with the option to play from 10p per spin! Well of Wonders is a collaboration from Thunderkick and Nyx that is extremely versatile, available to play on all devices, including tablet, mobile and desktops. If you are looking to bet big, there’s the option for this too, with the potential to bet as much as £100.

The slot has a high level of variance and an RTP of 96.1%, meaning the chance of winning is high, even if it’s difficult to get the big-winning run of multipliers.

Thunderkick has gone all out to ensure this stake has mesmerising graphics and intriguing animations. The game is 7 reels, 7 pay lines, and is artistically set in a magical forest, giving it an exciting and enchanting feel. This is cleverly combined with some magical music, encouraging the player to really get in the zone. The frequent chance of respins allows a player to make use of multipliers up to 32x.

As is expected from a Thunderkick game, Well of Wonders has an unusual setup to some extent. The player will initially see seven stones tantalisingly appear onto the reels each time they spin. If they are lucky enough to get three stones that are the same, you’ll have succeeded in getting a winning combination. However, the thing you really want to see on the screen is the red jewel, allowing you to receive a prize that is an astounding 50 times your initial stake.

Despite the option to bet small, a player can win big. Once you’ve got a winning combination, these symbols will be replaced with different ones, and this is where Well of Wonders gets especially exciting. If you manage to get a second win, your winnings will be doubled. This doubles each time it happens, with the multiplier doubling from 4 to 8, to 16, eventually multiplying by 32x your stake. You’ll see these multipliers in the wishing well – which is very ironic. If you manage to achieve the 32x multiplier, there’s the possibility to win 2,280 times more than your original bet, meaning it’s doable to win a big prize.

You can’t have a magical forest without a fairy – if you’re lucky, that is. In Well of Wonders, the fairy can magically appear each time you fail to get a winning combination, meaning all is not lost. With a simple wave of her magic wand, she can increase the multiplier herself, again up to 32x your stake.

In summary, Well of Wonders is a unique and enchanting game with an unusual setup, but this makes it even more exciting. The slot has the option to bet small, making it ideal for beginners who are not looking to break their bank on the first go, but also has the appropriate amount of intrigue when it comes to winning big. Check out the game on Casino 77 to give it a go.