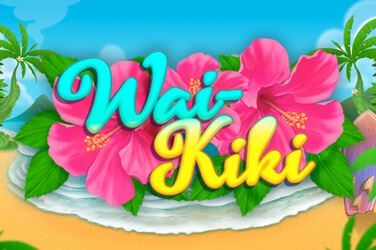 To many people, the Hawaiian islands are the epitome of a tropical paradise, and the loveliest place in the whole archipelago is Wai-Kiki beach, which welcomes tourists from around the world. You’re probably not in the mood to work when you’re sunning yourself in the sand, so it’s great that you can win money instead while enjoying your Hawaiian holiday!

This slot is gorgeous and sunny and comes packed with prizes too, so is Wai-kiki a little patch of sunlight or will you get sand in your shoes? Let’s take a look in our Wai-Kiki slot game review.

This slot really is a feast for the eyes, and if colour is your thing then you’ll be in heaven. The deserted beach is probably a little optimistic for Wai-Kiki, but between the crystal blue water and the golden sand nestled between lush foliage, this slot does a great job of setting the scene. The low-value symbols are represented by the generic 9 – A icons, though even these are decked out in traditional Hawaiian patterns and wreathed in lei. The high-value symbols are fishing hooks, cocktails, turtles, surfboards and ukuleles, which showcase a range of typical Hawaiian imagery. The design on these is cartoonish but great looking, and with the dreamy soundtrack behind it, this slot does a great job in setting the holiday mood.

While the Wai-Kiki slot game looks like a unique trip to paradise, the mechanics are all fairly standard. There are five reels and three rows to play with, with 25 paylines in total, and a generous betting range between £/€/$0.25 and £/€/$100. This all adds up to an RTP of 96.1%, which is pretty average. One nice element this game incorporates is the interaction between symbols, and all of the bonus rounds are activated by landing certain symbols next to each other rather than collecting three or more of the scatter. For example, land a turtle between two fishing hooks and claim a shark fishing bonus. This is just an animation followed by a random prize, but it’s still a fun and unique way of granting extra bonuses.

Speaking of bonuses, there are a few of them in play, and they all mean extra prizes for lucky players. The major bonus is the free spins round, activated in true Wai-Kiki fashion by landing a Free Spins symbol in the centre reel, flanked by ukulele symbols. This grants you 21 free spins, during which red and yellow flowers will fall and replace up to five of the cocktail symbols, granting an extra cash prize at the end of your spins for each one replaced. The turtle also comes into play yet again in a third bonus, becoming a special wild symbol when landing on the same reel as a wild that pays out 100x your stake automatically.

Wai-Kiki looks great, and it’s hard not to be charmed by the bright and colourful imagery and design on show in this slot. It’s also nice to see such an original method of awarding bonuses when so many other games are very similar in this regard. The payouts could be higher, but we think you’ll have fun anyway.