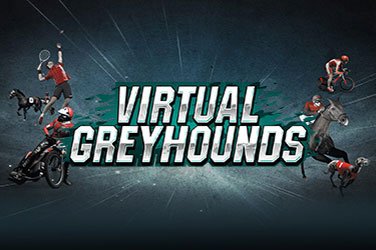 It may not quite be everyone’s cup of tea, but greyhound races really do serve as a great form of entertainment. From the speed of the dogs to the intensity of the fans, there’s very little that comes close to it in the world of short-distance betting.

Today, we’re going to take a look at Leap Gaming’s attempt to capture that glory with the Virtual Greyhounds slot game.

From the base selection screen all the way through to the live-action, the Virtual Greyhounds slot game has a huge resemblance to many of the other virtual sports slots underneath the Leap Gaming umbrella. There’s a lot to enjoy about that fact, and in many ways, the fact that the major change is the animal in question does help in giving it an entirely new identity – mainly because the track looks pretty different, too.

There are no standard paylines or reels as you must instead navigate through a string of tough decision making when determining what type of win bets to put down.

The return to player (RTP) percentage is going to be viewed as an integral factor in the majority of slot games in the industry, and to a certain extent that’s true for the Virtual Greyhounds slot game, but there’s not quite as much emphasis there due to the sheer unpredictability that rests in how they decide the winners. From a numbers point of view it comes out at 80-91.47% which is obviously way below the average, but with the possibility of winning 10,000 coins off of a maximum $/€/£500 stake, you won’t find too many punters complaining with the high rollers flooding in at will.

From a graphics perspective, it’s near enough impossible to find much wrong with this slot, and during these dark days, it’s nice to have a slice of normality – which is exactly what Virtual Greyhounds provides you with.

Opting to go for the Forecast bet is going to be your best option within the bonus features department as you attempt to predict who is going to finish both in 1st place and in 2nd place. Beyond that, you can also bet on races that feature as few as four racers and as many as 16, with the potential for some ‘each way’ betting in the sense of deciding who will finish in 1st, 2nd, 3rd and 4th.

The Virtual Greyhounds slot game may be looked upon as too similar to some of its rivals, but we don’t really think that’s the point of all this. The point is that virtual sports are growing in popularity not only because of the money that’s at stake but also because of the enjoyment that comes out of it.