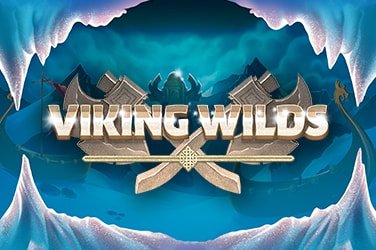 Few people strike both fear and admiration into the hearts of historians quite like the vikings. From their phenomenal history all the way through to the present day, the word alone is enough to send shivers down the spine of even the most cynical believer.

Today, we’re going to take a look at Iron Dog’s Viking Wilds slot game as they attempt to capture the spirit of the vikings in a way that few others have been able to do.

We take a trip into Norse mythology and deep into the snowy fjords with the end game being simple – to reach Asgard. This gorgeous slot invites us into a deep, meaningful storyline from the word go, and that’s not the sort of immersive experience you can just ‘fluke’.

As a direct result of the tumbling reels feature, there could be anywhere between 1,024 to 3,125 ways to come out with a win in this slot. Between that and the standard 5×3 reel layout, there’s already a lot to get excited about.

Plus, the symbols that pop up are well-themed too with the axe, shield, helmet and hammer working alongside the standard playcards.

The return to player (RTP) percentage is a controversial topic even at the best of times in the modern era of gaming, and with Viking Wilds slot game, that trend continues. The reported figure comes in at between 96% and 96.08% and when you match it up with many of its competitors, we’d argue that’s slightly below where it needs to be in order to be dubbed ‘above average’. Still, even with that being the case, the variance is said to be quite high with punters having the possibility of winning 6,000x their initial stake – and only off of a minimum to a maximum stake of $/€/£0.20 to $/€/£50.

In addition to the aforementioned tumbling reels, you’ve also got a Standard Wild, Sticky Wild and Expanded Wild, all of which serve the purpose of increasing your eventual winnings. With the expanded wilds, in particular, you could increase your multipliers by a significant margin.

Visually speaking we’d say this gorgeous slot tends to speak pretty well for itself, because not only is the animation crisp, but the theming sticks well throughout with the soundtrack slowly but surely building up the tension.

Iron Dog’s Viking Wilds slot game offers out the potential for big wins, takes us along for a nice storyline ride and never threatens to be too over the top, which is a risk you’re always to go run with theming such as this.

Some would suggest they could be even more adventurous with the bonuses and developing the story, but again, we’d say they should always leave players wanting more.

This is an impressive and well-constructed slot, and even though you may not expect to be addicted, we think you should prepare yourselves for that possibility.