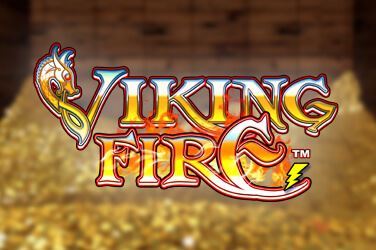 The Viking Fire slot game is one that has been brought to us by the new team on the block Lightning Box Games. It is a relatively recent creation to the market having only been released in October 2017 so there is a lot that is modern about it.

As you would expect from a modern slot, it has clear, clean, sharp graphics about it and the sounds are also clear too. This game can be played across all desktop, mobile and tablet devices.

As you can probably tell by the name of the game there is a Norwegian theme to Viking Fire. The scenery behind the reels is of a Norwegian town and all the storylines and features lead in that direction too. There are five reels in play on this machine and 40 paylines in total.

There is a good blend of icons in the Viking Fire game. We have the traditional and regular lower paying ones which are the 9, 10, J, Q and K while the higher paying ones include a wizard, a dog, a Viking princess armed with a sword and the Viking king. The Wild icon in this game is the hammer and the Scatter is the bonus symbol.

There are a few features in the Viking Fire game. The main one is the Free Spins bonus. This is landed when you get three of the bonus Scatters across the reels. A new game then develops where the aim is to destroy enemy ships. This will earn you either more free spins, extra wilds or you lose one of your two lives. You can get up to seven free spins in this game which isn’t a lot but the feature can be activated fairly regularly.

The other main feature in the game is the Gamble feature, which is quite popular in the more recent slot games. You have the chance to double your win in the base game or even quadruple it. To double the win you need to guess the colour of an unturned playing card correctly. To quadruple it you need to pick which suit the card is correctly. Do not get it wrong though else you will lose and your win will disappear completely.

The Viking Fire game comes with a RTP rating at 95.47% which is well below the average for a slot game these days, one which is on the side of the casino.

There is a lot to like about the Viking Fire slot, even with its Nordic theme making it one of many with a Norwegian outlook to it. The large number of paylines and that interesting and different game that is part of the feature are all things that capture the imagination with this slot. The free spins are fairly easy to come by and everything that goes with them can see you running up the wins nicely. This slot is one that should be tried by all.