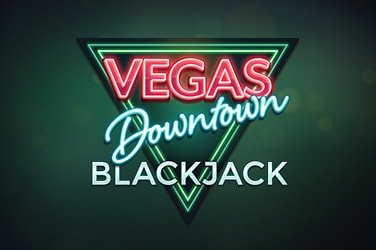 For players looking for a fun twist on classic blackjack, Vegas Downtown Blackjack is not to be missed!

Vegas Downtown Blackjack combines the classic rules of Blackjack with new and exciting twists. The game is played using 52 cards, and a player is able to bet on up to 5 hands simultaneously. There is no option for a player to surrender, adding an adrenaline-pumping atmosphere that helps a player to feel as though they are sat in a live casino. The majority of the rules of Vegas Downtown Blackjack do not differ too significantly from the original game of Blackjack, and first-time players often find they pick the game up quickly and easily.

The online game is played against a green table background, helping to create the atmosphere of a live casino. Captivating lounge music is played softly in the background, though this background noise can be muted if a player wants to concentrate on the voice of the dealer only. The game is packed with customisable features, such as the quick deal and auto bet features which can be turned on and off in the options menu.

Vegas Downtown Blackjack has been developed and created by Microgaming and is no doubt one of Microgaming’s most popular online games. Since 1994, Microgaming has been creating award-winning gaming software and have become well known for their progressive jackpot games which have seen them pay out more than €1.2 billion. Microgaming is situated on the Isle of Man but creates and develops software for global use. They released the world’s first mobile casino software in 2004, so it is not surprising that Vegas Downtown Blackjack can be played on mobile devices as well as desktops.

The RTP of Vegas Downtown Blackjack is 99.62% which is incredible for an online casino game. This RTP rate can vary, however, so should always be confirmed before playing at an online casino. Betting limits vary from $/€/£1 to $/€/£200, making the game suitable for first-time Blackjack players and seasoned Blackjack fanatics. A Blackjack win will see a player win 3:2, whereas an insurance win will see a player win the standard 2:1.

While there are no bonus rounds, there are bonus features that have been included in the game to help improve gameplay for players. For example, each round a player will have a strategy card available to them, which can be used to help a player decide the best move in a round. A strategy card is similar to a cheat sheet and can help a player lower the house edge to its minimum. Of course, the moves suggested on a cheat sheet do not have to be followed and a player is free to play a round however they choose. To use the cheat sheet, simply find the corresponding row and column and read the advice given.

If you’re looking to replicate the environment of a Blackjack casino table wherever in the world you are, Vegas Downtown Blackjack may be the perfect game for you.