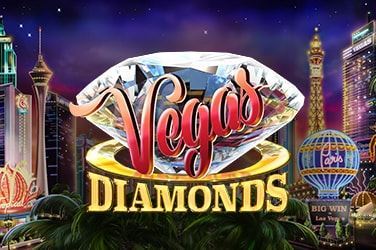 The bright lights of Las Vegas, Nevada need to be seen in order to be believed because while it may seem like as if they’re a million miles away, they are closer than they have ever been before.

One way to help us feel like that is by implementing them into different forms of entertainment – including, and not limited to, slots. ELK Studios attempts to capture that magic with their Vegas Diamonds slot game, and we’re going to try and figure out whether or not they’ve succeeded.

The Vegas strip is on full display from the minute you load up the base game, and given the theming behind the Vegas Diamonds slot game, we’d expect nothing less. They’ve gone down the classic fruit machine route which you rarely see by having a 3×3 reel layout, although that doesn’t limit your potential winnings as there still 25 paylines to try and work your way through.

The symbols are what you’d expected with good old Vegas from watermelons, cherries and lemons to bars, double bars and even treble bars.

The return to player (RTP) percentage will so often play an integral role in the way that most of us view these slots, if only because we want to get a clear picture of the financial implications that could stem from playing it. The Vegas Diamonds slot game is no different, with the reported RTP coming in at 96%. That’s around the average mark when compared with what you’d expect within the industry, but with high volatility, it’s going to be pretty difficult to turn a blind eye to the possibilities on offer here.

What you see is what you get with the visual aspect of the slot, from the soundtrack that makes you feel like you’re in a chilled out casino lobby to the stereotypical Vegas theming that makes us want to jump on a plane and head to the States right now.

If you locate an identical symbol on the first two reels you’ll trigger the Perfect Match Respin feature, allowing you to pick up respins that’ll significantly increase your odds of sizeable winnings. There’s the Free Spins section, the Vegas diamonds Fortune Wheel which gives you three spins on a fortune wheel from Bronze to Gold, and the Nudge feature that gives the Vegas Diamonds symbol itself a chance to align perfectly and give you even more bang for your buck.

The Vegas Diamonds slot game may not have what it takes to blow everyone’s socks off, but with an appeal to high rollers and winnings that do justice to the Las Vegas theming, we’d argue they’ve done a fairly solid job.

It’s easy to follow, it’s quite addictive, and it’s a rare slot that gives you the chance to relax and win some money in equal measure.