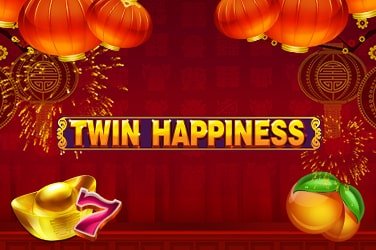 Twin Happiness is a five-reel slot from NetEnt themed around traditional Chinese symbolism and imagery. It’s a simple theme which is becoming more common in slot games, though it’s unusual for developer NetEnt to produce such a back-to-basics slot game like this.

The graphics are nicely done and attractive, though it’s got to be said that there’s little to set this slot game apart from the rest. It can be a fun game with some interesting mechanics, but there’s little to make Twin Happiness a favourite in the busy Chinese slot market today. The gameplay is very similar to that of Twin Spin, so it’s worth a shot if you’re keen on that title.

In Twin Happiness, players spin 3×5 reels populated with fruit symbols, numbers, and Chinese icons including lanterns and fortune cookies to make winning combinations. The game’s graphics are neat but simplistic, and the standard gameplay is what you’d expect from a basic slot game. The game’s simplicity makes for quite a relaxing zen-like feel, which could be what NetEnt are going for. Despite this, players can win up to 1000x their stake each round, which should provide enough incentive to get some adrenaline going. Twin Happiness also features the 246 ways to win rule, which means that players can land winning combinations in a wide variety of ways.

Bonus mechanics are always the way in which slot games set themselves apart from the rest, and Twin Happiness is no different. The game’s key feature is the Twin Reel special, wherein every reel can be linked up with other reels to spin in synchronicity; twinned reels always display the same symbols, so as you can imagine this is an easy way to land bigger combos. Reels can twin in sets of two, three, four and even five reels; if you manage to get every reel twinned and displaying the gold ingot, you can win up to 1080x your stake with this mechanic. As far as bonus mechanics go, it’s simple, but it can be effective.

Like most of NetEnt’s offerings, Twin Happiness is playable on mobile. The game’s simple interface actually makes it pretty ideal for mobile play, as all of the symbols and graphics are perfectly clear even on much smaller displays. It runs smoothly on iOS and Android and is a pretty good game to play in short bursts during quick breaks.

Twin Happiness’s return to player is 96.55%, which is a little above average for a slot game of this kind. It’s also a medium variance game, which means that it’s fairly evenly balanced in terms of frequency and size of payouts. Twin Happiness offers good chances of winning to most players, though it may suffer from a crucial flaw: casual players may be more likely to choose a more inspiring game with a lower RTP, and serious players will simply choose one of many slots with a higher RTP.

It can be a fun game with some interesting mechanics, but there’s little to make Twin Happiness a favourite in the busy Chinese slot market today. The gameplay is very similar to that of Twin Spin, so it’s worth a shot if you’re keen on that title.