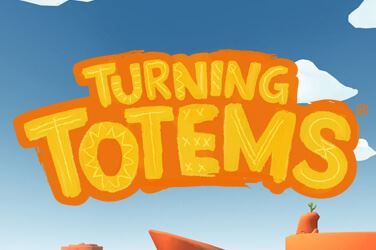 We’re heading to the deserts of the American southwest in this next slot, which leans heavily on the culture of the indigenous peoples of that region for its inspiration, featuring an eclectic and exciting mix of amazing graphics and top-notch design work to really bring this slot to life.

Turning Totems not only looks great, but it also brings together some excellent and original features to create a game that plays really well too, so winning the cash will be a breeze for even the most jaded slot player. Let’s take a look at the slot in action with our Turning Totems slot game review.

The first thing you’ll notice about this game is the juxtaposition between the simplicity of the cartoonish style it uses versus the level of detail depicted in the game, with a swooping opening cinematic introducing the setting and its characters: Native Americans in the parched deserts of the American southwest. Five totem poles act as the reels, while the carved heads that make up their segments are the symbols, with each one depicting a stylised version of an animal from the region as well as characters from Native American legend. A cartoonishly styled Native American warrior joins you on your quest to the left of the reels, reacting to your wins and occasionally performing little dances as you play. As the name implies the totems turn around to reveal the next set of symbols, rather than the reels spinning, which is a small difference but a nice touch all the same.

One interesting thing to note first is that the symbols in this game only need to land on the reels to be matched, in any position, a bit like a scatter. You need to match at least six symbols to form a win, so it’s a little harder than in a more traditional slot, but that’s made a lot easier by the fact that you don’t need to match the symbols in a line. Rather than betting on paylines, you simply choose your stake for the whole spin and try to land as many of the same symbols on the reels as possible, with the maximum of 15 paying out the most. This means you can win more than 1,200x your stake for fifteen of the pink bird heads, which is a very tasty sum! You get extra help in this regard too: If five or more of one symbol land on the reels they’ll be held in place for the next spin, and they’ll stay there as long as more of the same symbol lands in subsequent rounds, making it easier for you to rack up those matches. That’s probably why the RTP is pretty good, coming in at 96.1%

A couple of extra bonus features help elevate this slot up to the next level: Firstly, the thunderbird symbol nicely spices up the game. ‘Sleeping’ wilds land pretty regularly, but don’t do anything when they’re in their dormant state. Landing a thunderbird symbol strikes the totem it lands on with lightning, waking up the wilds and causing them to substitute for other symbols, while also granting you a free spin. The thunderbird also helps out in the free spins round too, activating the bonus when three thunderbird reels are active at once. For this game, you get a whole new set of totems as the Native American boy runs off amid pelting rain and rolling storm clouds. You start off with 12 free spins, though you get an extra spin for every bonus symbol you land in these rounds, as well as an extra 1x multiplier on top-up to a maximum of 5x.

The Turning Totems slot game manages to strike a great balance between new and old. It doesn’t tear up the slots rulebook, but it drops in just enough new elements to make this game exciting and different. Combine this with the great-looking graphics and the fun theme, and you’ve got yourself a must-try game!