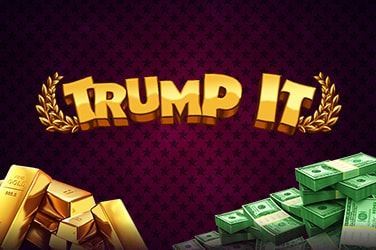 It’s safe to say that there have been plenty of fascinating slots produced over the years, many of which have been based on a range of different themes and topics. However, we can’t say that we ever expected many to stem from the tenure of Donald Trump as President of the United States.

Today, we’re going to take an intriguing look at Fugaso’s Trump It slot game and try to figure out how we’ve wound up at this insane point in our history.

As crazy and insane as the Trump It slot game may seem, there is something resembling normality within the actual layout. The 5×3 reel system is known throughout the industry, there are 15 fixed paylines and a whole bunch of different features that are bound to get people talking.

The symbols are as remarkable as you may imagine and include Hillary Clinton, Vladimir Putin, Barack Obama, a busty redhead who many assume to be Melania, a Mexican individual and five letters – T R U M P – all of which feature the colours of the American flag. Yes, you heard that right.

The return to player (RTP) percentage is used as a way to measure just how much someone can expect to make, financially speaking, from any given slot. It’s a divisive tool but it is indeed used for the Trump It slot game with the reported RTP coming in at 95.94%. Based on the industry we’d suggest that is slightly below average, but with the volatility benign ranked as medium, players should anticipate a steady stream of smaller wins – which may not appeal to the high rollers amongst you.

Visually speaking this is the definition of a wacky slot and there’s no way of getting around that because whether it’s the soundtrack or the cartoon-esque animation, everything about this design work has been set up to have a good old laugh. In truth, we don’t really think there’s anything wrong with that.

The wild symbol is, unsurprisingly, the one and only Donald Trump, who is dressed as a jester. Landing some of these symbols in excess can improve your winnings, hitting a few Putins can improve your multiplier and give you some free spins, and between 3-5 politicians at any given time can also improve your odds of success.

The Trump It slot game is political by definition and because of that, fans of the man himself may not be all too inclined to jump for joy about its existence. However, purely from an analysis point of view, we’d say this is a fun slot to play.

There are decent enough winnings on the table and while there isn’t any given storyline to touch on, it’s entertaining – and that’s all you can really ask for.