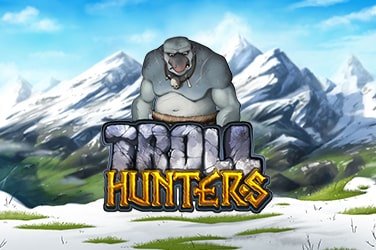 Nobody enjoys the presence of trolls – whether it be online or through various films and TV shows that portray them to be monsters who want nothing more than to ruin our day.

Play ‘N GO’s Troll Hunters slot game hopes to exterminate these beasts from our lives on a permanent basis, and today, we’re going to see just how enjoyable the slot itself really is.

The gameplay seems a bit rigid at first glance, but the Troll Hunters slot game has far more to offer than what we get to see upon loading it up. The layout is a little bit different with the reels being set up in a 5×5 stance, and with a cascading wins and reels feature being at their disposal, there are plenty of ways to walk away with some tasty winnings.

There are many themed symbols in play such as Viking ladies, earrings, beer mugs and meat, giving you an idea of the variety that we’re dealing with here.

The return to player (RTP) percentage is present in the majority of slots courtesy of the financial implications that come with it, and the same is true for Troll Hunters. The final RTP figure here comes in at 96% and, within the context of the industry as a whole, we’d say that’s about average. The volatility is around the medium region which means you should be in store for a steady stream of payouts with potential winnings of 500x your initial stake. Plus, you don’t have to break the bank if you want to play, with a minimum stake of $/€/£0.20 and a maximum of $/€/£100.

The game’s look and feel

In terms of the visuals, we’d argue that this comes across as a slot perfectly aligned with the Horrible Histories animated series. It’s a bit silly and a bit over the top, but it’s so intoxicating that it’s almost hard to look away. Plus, some of the design work is actually quite good.

If you’re feeling lucky then you should go on the hunt for the trolls themselves, because if you land five or more of them, you will trigger another round of FIVE free spins – with up to 20 free spins to be won in total. The general Free Spins feature appears thanks to the B O N U S letters that are seen beneath the reels, but you’ll need to clear a whole column if you want to trigger 10 free spins.

The Troll Hunters slot game is clearly a popular title as it has launched as a series of games within itself, with some indicating the sequel is better than the original. While that may be true from a technical perspective, we always think the original gives off the best possible impression of what a slot has to offer.

Troll Hunters is fun, it’s loud, and it’s different enough to warrant some happy gameplay. The winnings are decent and with a steady RTP, we can’t see why this isn’t a slot for all to try out at least once.