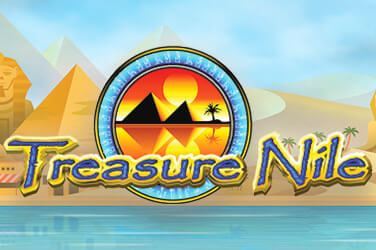 Slots themed around Ancient Egypt are a very common choice for developers, so it takes something really special to stand out from the pack, which is what Treasure Nile by Microgaming is attempting to do.

As far as unique selling points go, the obvious one here is the progressive jackpot, which is welcome on desktop and almost unheard of on mobile, but is the rest of the game worth your time? Let’s take a look in our Treasure Nile slot game review.

Treasure Nile has a unique art style that immediately draws your attention, utilising such clean and simple lines and colours in its imagery that it sails a dangerous course between cool and dated. Unfortunately, while the symbols themselves have potential, the rest of the game definitely falls on the dated side of that line, looking like something that would have passed ten years ago. The blocky colours and dated graphics aside, the symbols are all what you would expect: There are a few too many generic 9 – A symbols for our tastes, but the high-value symbols look the business, with everything from sheaves of Egyptian wheat to Ankhs, golden cobras, magic spells and Tut himself represented. Aside from the Windows 95 vintage intro movie, there are no animations, so you’ll have to content yourself with the cash instead.

And the cash is the real saviour of this game because there is a whole lot of it to go around. The Treasure Nile slot game is played on a standard-issue five-reel, three-row setup with just nine pay lines, and the betting is a little unorthodox too. Usually, we’d tell you what the available range is here, but there isn’t one, because you have to bet £/$/€4.50 each time. This is likely to be a little high for low rollers and is definitely on the low side for more experienced players, so it’s annoying that you can’t choose like you can in most other games. Winning is a little more straightforward, however, as even the lowest paying symbol boasts payouts of 100x your stake when you land five. This maxes out at a whopping 6,000x your stake for five masks of King Tut, which is very generous for the main game prize. You may not end up seeing that symbol too often though, because a truly shocking RTP of just 92.11% means the odds aren’t in your favour.

The news isn’t good here for fans of bonus rounds, because there aren’t any mini-games or free spins to be had, though there is still a scatter and a wild in the game. The golden scarab scatter doesn’t actually do anything as it might in a game with bonuses, but it can win you 50x your stake if five land anywhere on the reels. The wilds are a pyramid scene, and they can substitute for other symbols to complete combos. All is not lost, however, because there is a progressive jackpot to play for! Land five King Tut symbols on the ninth pay line, and instead of the 6,000x win you’ll win whatever was in the progressive jackpot kitty on that day, which is effectively unlimited. This changes from minute to minute, but a running total of the current amount is helpfully displayed at the top of the screen.

Treasure Nile doesn’t exactly impress in terms of its graphics, and while the payouts promised in the table are large, the RTP suggests it can be difficult to pry them away from the pharaohs. This might put some players off, but it can be hard to resist a progressive jackpot no matter how hard it is to land one, and the promise of a massive, uncapped prize!