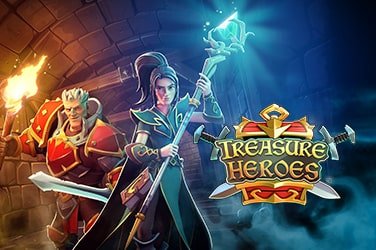 Everyone loves the idea of going on the hunt for medieval treasure – or at least, anyone with a true sense of adventure does. The Treasure Heroes slot game by Rabcat takes us into an entirely new realm within the fantasy genre, and hopefully, it does so in a way that fascinates and intrigues players for many years to come.

We all want to be taken on a journey in a slot, and based on our first impression, the Treasure Heroes slot game achieves that goal quite nicely. The 5×5 reel layout really does force you to reassess what you thought you knew regarding standard slot conventions, but trust us when we tell you that there are plenty of ways to find success here.

The theming stretches out to the symbols too with the following making an appearance on the reels: jewels, dragons, lamps, warriors, magicians and a lovely chest of gold.

The return to player (RTP) percentage is an important piece of the puzzle for most slot players regardless of what game is they’re playing, and the same will be true for the Treasure Heroes slot game. The reported RTP rocks up at 96.12% which is probably just below the standard average, but with medium volatility, players can probably expect a steadier stream of smaller wins than they usually would – which may throw a few high rollers off the scent.

Punters can expect winnings in excess of 1,000x their initial stake depending on the mode they’re playing on, and with the minimum to maximum stake going from $/€/£0.20 to $/€/£40, that isn’t a bad deal whatsoever.

How does it look?

The visual of the base game starting off in a castle is really nice and when you mesh it together with the comic book style design, we’d argue this could be turned into a video game of some description with some fine-tuning.

The Moving Walls feature is present throughout the gameplay, shifting the 1st, 3rd and 4th reels around to create an entirely new set of symbols – which also sticks with the theming quite nicely.

The scatter symbols in this game feature one half of a key and if you can land on both at the same time, you’ll be able to enter the Treasure Chamber Free Spins features. With 10 free spins to your name here (without the Moving Wall), you’ll want to land on the warrior and magician symbols as they can turn into wilds.

The Treasure Heroes slot game may be one for the hardcore fantasy-themed fans out there because, in many ways, we get a lot of Runescape vibes from this Rabcat product. If you like it then you’ve probably going to love it but if this isn’t really your style of gaming, then you’ll probably want to move along pretty quickly.

For the audience that they’re trying to cater to, and with decent wins being available, we’d say this is a solid effort.