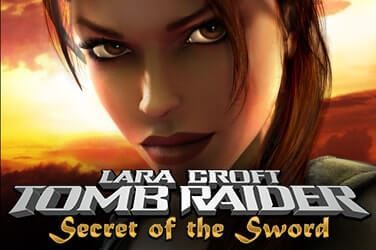 Lara Croft has been perhaps one of the most popular video game characters of the last 20 years, and Microgaming have delivered an exciting video slot game based on her, with plenty of action and opportunities to win big as well.

Despite the game being over 10 years old, the visuals do not look dated at all, which is a testament to their quality. Microgaming have based the visuals on the game series by Eidos Interactive and Core Design, and so the theme is pretty evident the moment you start the game. A stone wall, presumably of a pyramid or similar structure, forms the background for the reels, and there is a suitably haunting background score which adds to the ambience as well.

This is a video slot game with five reels, three rows and 30 paylines. Players can bet from $/€/£0.30 up to $/€/£60 per spin. You can get wins for landing at least three matching symbols on a payline, starting from left to right. There is an Autospin feature which you can use to speed up gameplay, for 25, 50, 75 or 100 spins, while you can also go into the Settings menu and use the Quick Spin mode to increase the speed of the spins as well.

The symbols on the reels are all taken from the Lara Croft video game series, with the standard card royals from A to 10 along with four high-paying symbols which are all different versions of Lara Croft from the game. The head shot of Lara Croft is the game’s Wild, and will substitute for all other symbols on the reels to try and create winning combinations. It can also give you a decent payout, maxing out at 250x of your stake if you land five of it across a payline.

There are a number of bonus features that can trigger during the base game, increasing the likelihood of a large payout. The Super Mode feature triggers at random in the base game, after which you receive five free spins. During these spins, random positions on the reels can become Wilds, which will then get locked for any further free spins, increasing your winning chances.

Landing at least three of the Excalibur Scatter symbols on the same spin will trigger the Free Spins round, where you will have 10 free spins. You will also receive a prize of 3x, 20x or 100x of your stake depending on how many scatters you landed (3, 4 or 5 respectively). This round is played on the Rolling Reels game engine, where the symbols that form part of a winning combination are removed from the reels, with new icons dropping to replace them. Each consecutive win also increases the multiplier, which can go as high as 5x.

The Global Adventure Bonus round is triggered when you land the passport icon on the middle position of all five reels, ‘activating’ the reels. Here, you are taken on a tour of the world in search of the five missing sword fragments, with these rounds set in London, Nepal, Bolivia, Ghana and Japan. In each location, you are offered the choice of six artefacts. Pick one to reveal either a multiplier, a cash bonus or the sword fragment to go on to the next location. If you manage to uncover the Hidden Treasure at any location, you will get all the prizes in that location, along with a 2x multiplier, a cash prize and the Shootout Bonus round as well. Here, you will have to choose from 15 discs, each of which has a cash bonus. The Global Adventure round continues till you uncover 2 hidden traps, and you can win up to 450x of your stake here.

This is a game that is bound to evoke a lot of nostalgia among players, while at the same time providing a lot of excitement and winning potential.