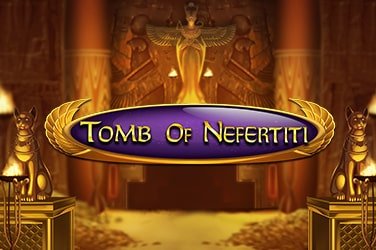 We’re on yet another adventure to the tombs of Egypt in this slot by NoLimit City, braving the desert sands and all manner of creepy crawlies to get at the amazing treasure held within the vault of Nefertiti. It’s no easy task though, as the gods, the wildlife and even the curse of Nefertiti herself are arrayed against you on your adventure.

Can you overcome the odds to claim the amazing riches of the famous Pharaoh, or will you be stuck in the sand? Let’s find out in our Tomb of Nefertiti review.

Slots with an Ancient Egyptian theme are probably the most common type on the market, so it takes something really special to catch our attention. Luckily Tomb of Nefertiti gets high marks already for the quality of its presentation, and while it doesn’t look especially different from the other similar games, it’s at least very well designed. The symbols are extremely well done and detailed, dripping with gold and jewels and perfectly depicted with excellent shading and colour, while the background is appropriately grand and intimidating with Egyptian architecture and temples galore. It’s a shame that the lower value symbols are the generic 10 – A, though even these are wrought in gold, but the high-value cat, Horus, Anubis, scarab and jar all look amazing.

The Tomb of Nefertiti slot game itself is presented on a five-reel, three-row board and boasts from 20 to 40 paylines. The betting limits are pretty generous, between £/€/$0.10 and £/€/$100, and with a maximum win of 3,768, you can certainly grab yourself a lot of cash with this game. That is reflected in the generous RTP of 96.1% which marks it out as a medium variance slot. Along the way, you’ll come across a scatter and a wild, represented by Nefertiti and a nameless tomb raider type character respectively, who will both help you out in the bonus rounds.

Something that will excite players immediately is the winning re-spins feature, a bonus round that’s always active, meaning that all winning combos automatically re-spin themselves. Only the winning symbols re-spin, but it allows you to potentially win several times in a row from just one win. Each time you win in this way you get another 1x multiplier up to a maximum of 3x, adding to the cash in your kitty. This limit is removed in the Wild Raider feature, adding even more chances to win big.

The main bonus game, called Wild Raider, is activated by landing three or more scatters. This grants an initial 10 free spins, and after each spin, another wild is added to the reels, while each time you match a combo in this part of the game the total multiplier increases by 1x with no limits. Every scatter you land in this feature also grants you one extra spin, so there are plenty of rewards to be found. On top of all this, the Curse of Nefertiti is a feature that is randomly activated during Wild Raider and causes the middle three reels to spin slowly and independently of the rest of the reels. When they come to a stop they will all display the same symbol, potentially creating big wins.

While Egyptian slots are two a penny, this one is as good looking as interesting as any on the market and is well worth a look. The base game looks great and is fun enough to play, with high betting limits adding a bit of spice to the mix, while the bonus games add much-needed volatility to the mix so you can rack up some truly big prizes.