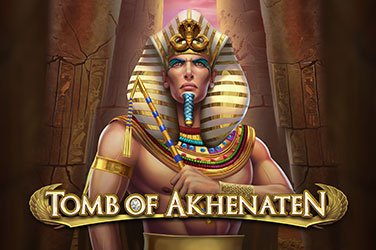 When you come from a culture as mysterious and mystical as the Ancient Egyptians’, you have to go some way to stand out, which is why we were so excited to play Nolimit City’s game Tomb of Akhenaten brought to you on Casino 77 by Groove gaming.

Father of the famous Tutankhamun, almost all traces of the king’s reign and the strange new religion he created were wiped from history by his enemies after he died, but he lives on in slot form thanks to this fascinating new game. So will you uncover the ancient mysteries of the Pharaohs, or is it just an old wives’ tale? Let’s find out in our Tomb of Akhenaten review.

Everything looks more or less as you’d expect it to in the Tomb of Akhenaten slot game, with the traditional ancient ruins and hieroglyphs putting us firmly into the setting of a crumbling old tomb, though this one seems to be rigged up with all kinds of ancient mechanisms that operate as the reels spin. The low-value symbols are represented by the generic 9 – A icons given an Arabic makeover, but the higher value symbols are Akhenaten and the various Egyptian gods who seem to have been working out because they all sport rippling muscles and various weapons. There’s also a suitably spooky Egyptian theme playing in the background, which helps to further set the scene and changes to become faster and more frenetic as the action heats up.

One thing to remember about Tomb of Akhenaten is that it has lots of ways to win rather than big individual payouts, so don’t be too upset that the top paying symbol only gets you 5x what you put in. That sounds tiny, but don’t worry, because the features are about to make that figure look a whole lot better. Every win that you generate activates that strange machinery on either side of the screen and adds another row to the reels as well as granting you a re-spin so that your ways to win goes up to 1,024. If you win a higher amount on that re-spin than the original win the same thing happens again, granting a re-spin on reels with 3,125 ways to win. You can even get a third re-spin, at which time Pyramid wilds are added to the reels that turn other symbols wild. This results in a game with lots of lower value wins in big chains and an RTP of 96.09%

Considering all the excitement that is available during the main game, you might be surprised to learn that there are extra bonus features on top! Landing three scatters gets you 8 free spins, though the same row adding feature can be activated in this round too, so you can potentially generate some pretty big wins. On top of that, the re-spins you generate in the free spins section come with an added multiplier up to 3x.

Tomb of Akhenaten might look like a relatively standard Ancient Egyptian slot, but thanks to its genuinely unique re-spin mechanic, we think there’ll be a lot for you to enjoy in this slot. There are some pretty massive combos possible, but there are also some great extra features that could make you as rich as an Egyptian King!

If slots aren’t your thing and you love casino games, we have excellent choices: Black Diamond VIP, American Roulette, and Immersive Roulette.