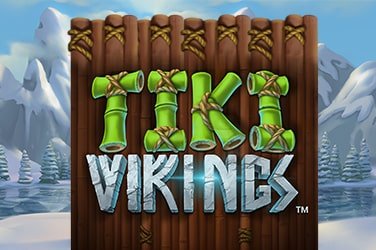 If you ever wanted to see what would happen if a string of Vikings headed on over to the gorgeous island of Hawaii, then boy oh boy are you in luck. The Tiki Vikings slot game by Microgaming may be more than just a little bit out there, but the fact that they’ve even decided to take such a leap of faith automatically makes us want to review it.

Today, we’re going to see whether it comes across as a triumph or a major mistake.

There is a relentless pace to the Tiki Vikings slot game that builds and builds as time goes on and you can immediately feel that in the gameplay. The 5×3 standard reel layout allows the board to breathe nicely on its own, and it also functions with a steady 20 paylines.

Strangely enough, we do see a few of the Polynesian-themed play cards featuring on the reels but alongside that, we get some themed symbols: the blue Viking, the pineapple Viking and the ginger Viking – all of which work alongside the Tiki Vikings logo.

The return to player (RTP) percentage is an important statistic within the slot world and likely always will be, if only because some players out there want to get a clear idea of the financial rewards they could be walking away with. This is true for the Tiki Vikings slot game with the RTP coming in at 96% which can probably be defined as slightly below average. Still, with medium volatility, you can probably expect a more consistent stream of smaller wins than you would with higher volatility.

Players don’t have to break the bank to get started here with a minimum stake of $/€/£0.10 and a maximum of $/€/£250, and with the ability to win over 300x your initial stake, you can’t really go wrong with a bit of effort and persistence.

In terms of the design work, we absolutely love it. There’s real creativity behind this idea and that manifests itself with a bright theme and the sort of soundtrack that both adds to the drama and makes this feel like a movie experience.

If you can get a winning outcome with one of the main symbols or Tiki Viking logo, you will trigger the Symbol Lock Respin feature. This locks symbols into one spot with a respin then being available, potentially adding to your original win.

Plus, from the Symbol Upgrade feature, your payouts will be enhanced even further with the locked symbols being upgraded to the next highest value symbol.

The Tiki Vikings slot game is daring in the way it tries to mesh together two well-known themes, and in our opinion, the developers have hit a home run. It’s smooth, the gameplay is entertaining and it’s actually quite addictive. The potential winnings aren’t exactly mindblowing but with everything else it has going for it, they don’t need to be.