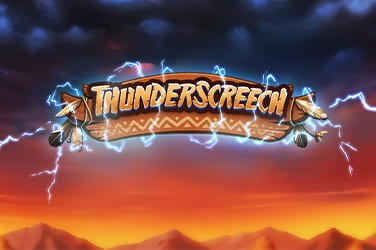 Casino77 players who want to play a slot game that features a number of random bonuses that trigger additional wilds, as well as a great free spins game, need to check out this Thunderscreech review now!

This Thunderscreech slot game review found that the developers, Playn’ GO, have opted for a theme that has taken inspiration from North America as they have provided players with a number of different objects and visuals that can be closely associated with the region.

Casino77 players will find a wonderfully designed background when they load the game as they will also see some rather brilliant animations that involve the game’s eagle, as it soars through the sky and across the grid at times.

The playing grid that has been used in this game includes 5 reels and 3 rows, thus keeping the overall gameplay experience as seamless as possible, whilst there are also 10 paylines that can be utilised to try and form winning spins on. A minimum bet of $/€/£0.20 per spin is required, but players are able to wager a maximum bet of $/€/£100 on each spin if they wish.

As part of this Thunderscreech slot game review, the paytable was explored to reveal to Casino77 players just what they could expect when trying to land the icons on the 10 paylines that are available to form winning sequences.

Whilst traditional royal playing cards continue to make an appearance on the reels as the low-value icons, these are followed by creatures and animals that can typically be found in Native America, such as beavers, otters, badgers, wolves and a predatory bird.

Further special icons are also available in this game as they can help to trigger the Thunderscreech bonuses that can be played, with icons such as totems, dreamcatchers and birds of prey all appearing.

There are numerous different Thunderscreech bonuses available to trigger in this online slot game from Play’ N’ GO, with a couple of them being triggered randomly throughout the game.

The first is the ‘Call’ feature that can be activated at any time and this bonus will see players be rewarded with additional wilds, as anywhere between 5 and 9 can be added to the reels at any time. It should be known that this feature can help create a number of potential wins, as the main wild in this game can only make an appearance on the central three reels!

The second random Thunderscreech bonus that can be activated is the ‘Strike’ feature which will see all wilds that are on the reels at the time be turned into ‘Thunder Wilds’. These special icons will then be locked in position on the reels whilst the rest will be respun, with each win that is achieved increasing a multiplier by 1x.

The main Thunderscreech bonus available is the ‘free spins’ game that can be activated when players land 3 of the dreamcatcher icons on the reels. Bettors at Casino77 will notice that the regular wilds will all instantly be turned into the ‘Thunder Wilds’ with at least one appearing on each turn for the duration of the free spins game!

The return to player (RTP) rate for this Thunderscreech game by Play’n GO is 96.20% and features a volatility level that can be considered to be of a medium level.

As mentioned throughout this Thunderscreech game review, the bonuses on offer can make a huge difference to the overall gameplay provided by Play’n GO and can also make a real difference to the bankroll that a player at Casino77 has!

With so many additional wilds potentially being added to the reels and numerous free spins on offer, Casino77 players will wish that they can soar the skies like an American Eagle can once they have played this online video slot game!

Make some noise if you love slots! Next up to try, you have Dragon Ship, Eye of the Kraken, Golden Legend and House of Doom.