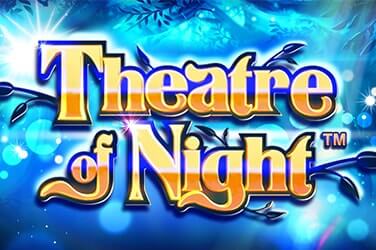 The Theatre of Night slot game was brought to us by the NextGen Gaming team. It was released onto the landscape in April 2017 so it is one of their more recent creations.

When you open up the machine the first thing you notice is the amazing colours on the background. It is a moonlight setting in a forest sort of environment and really brings amazing visuals to the game. There is a nice soundtrack to blend in with it, and as with all modern slots Theatre of Night can be played on a desktop or mobile and tablet devices.

The Theatre of Night game has a wonderful setting, with the player looking to use the creatures of the night to their advantage to build up significant win opportunities. The machine is a video slot where there are five reels but just the 10 paylines. Despite that, you can win up to 750 times your original stake if you hit the jackpot.

One thing to like about the Theatre of Night game is the icons on the reels are different to the norm. The lower paying symbols here are the card suits with the club and the spade paying slightly less than the heart and the diamond. Other icons include the butterfly as well as the pink flower. The white bird is the highest paying of the regular symbols. The Wild is the Theatre of Night icon.

The big bonus feature in the Theatre of Night slot game is the Firefly re-spin one. Three Wild symbols on the middle three reels is what is required to activate the feature. You’ll be rewarded with six Firefly re-spins where the entire middle reel on each one will be a stacked Wild. During each re-spin random symbols can become Wilds as well. If you get a combination of five Wilds during this feature you can win 750x your initial stake which is not to be sniffed at!

The other feature of sorts is the Wild feature. When you land Wilds on the middle three reels this feature kicks in. The Wilds will replace other symbols on the board to guarantee you a winning combination.

One of the best things about the Theatre of Night slot game is the RTP rating it has. The RTP rating is 96.13% which is slightly above the average for the player.

The Theatre of Night slot game can be quite compelling and it is easy to spend hours having fun with it. There is probably medium volatility to the game but there is a simplicity to it as well. The feature is fun and can be nicely rewarding. If you are looking for a high risk, explosive slot others are better suited to you but, should you be looking for a striking machine with stunning 3D graphics, an enjoyable soundtrack and a decent storyline then this one is to be recommended. Open it up and let the darkness lead you to the riches of the light!