Home » Playngo » The Sword and The Grail 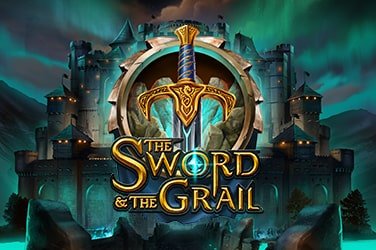 Tales of chivalry and bold knights have been a mainstay of the online slots gaming world but well-known games producer Play ‘n Go have produced an intriguing take on the theme.

Play ‘n Go are a Swedish game development company who needs little introduction, having established themselves as one of the biggest games producers in the world, since their launch in 2005. The company is known for producing cutting-edge games for a modern audience and Sword and Grail, which came out in 2019, is a good example of their craft.

The game does an effective job of capturing the medieval feel of a lost world of jousting knights, with a suitably grand visual impression, and a stirring soundtrack. The overall combination is enhanced by the sumptuous realisation of some famous legendary characters on the reels, including Merlin, King Arthur, Lancelot and Guinevere, while the lower values are represented by the traditional royal card numbers, though displayed on ancient coins, which is a nice touch.

Sword and Grail is built around a five-reel, three-row game structure, with 20 paylines available, and stakes ranging from £0.1 up to £100 and an impressive maximum win of up to 1,000,000 coins. This is a high volatility slot with an RTP of 96.53% that could lead to some big prizes.

The Wild takes the form of a grail and it has the power to swap for any other icon apart from the Scatter. The payout with the Wild is pretty good too. It pays out x50 the take for landing a winning payline and features a multiplier, which ranges from x2 all the way up to x100.

The most impressive bonus feature is associated with the Scatter, which in this case, is represented by a mystical sword being pulled from a stone. Landing three swords in any place on the reel will trigger a series of free spins, during which every Wild has a multiplier of x2. The aim is to find as many sword symbols as you can, to move through four stages. For example, to move from the first stage to the second, you must line up six swords, providing for five extra spins.

The biggest rewards are unlocked if you can bring up 7 swords on the reels. This will open the final stage, which provides another set of five free spins, during which the Wild symbols are associated with a x100 multiplier, leading to some potentially big payouts.

It is sometimes difficult for games developers to find a new angle on a classic theme but Play ‘n Go have certainly done that with Sword and Grail. This is a modern, cutting-edge slot, packed with features and bonuses, that has been designed to produce a video-game style experience, including an appealing narrative element in which the player is able to progress from a humble squire to a fully-fledged knight during the course of the game.