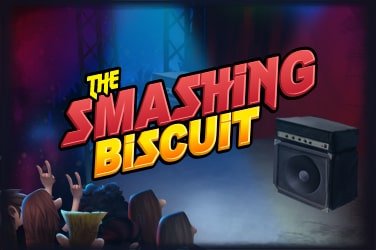 We all love to look back on our youth with great fondness, regardless of what those years may have looked like for all of us. One of the reasons for that is the style of music we were all into, which is where The Smashing Biscuit slot game from Microgaming comes in.

With the 1990s grunge band in full effect, this slot comes across as wacky and fun – and it’s time to explore the reasons for that.

The standard 5×3 reel layout is one of the only conventional things about The Smashing Biscuit slot game which, as you can probably tell by now, doesn’t abide by many of the rules we’ve come to know in the slot world. There are 20 paylines to work your way through, and with regards to the symbols, you’ve got a few play cards shaped as guitars in addition to the Biscuit brothers themselves and the father of the group.

The return to player (RTP) percentage is an integral part of most slot games, if only because it gives a far clearer indication of the financial possibilities that reside within the product. The same is true for The Smashing Biscuit slot game with the reported RTP being between 96.01% and 96.08%. That’s probably just below the standard industry average, but when you combine it with medium volatility, it could lead to a steadier stream of smaller wins – depending on how persistent and resilient you’re feeling.

Visually speaking the design work is entertaining and looks like it could probably transition into some kind of TV show, and when put together with the rock soundtrack, it does feel as if you could be playing Guitar Hero.

You’ll want to keep an eye out for the golden wild symbol as well as the scatter, mainly because landing three of the latter can trigger a much higher prize.

The Random Dad bonus, if activated, can cause a multiplier of up to 11x on any given spin when he comes in and adjusts the band’s volume. That works alongside the Battle of the Bands free spin round which is, as mentioned before, triggered by securing three scatters. A win with any of the band members will turn them into wilds, opening up the door for more frequent victories.

The Smashing Biscuit slot game introduces everything from Crunchy Biscuit to Soggy Biscuit and beyond into the mix – and while that may be a bit disturbing, the overall theme is unique enough to make it work. It’s a slot that works in association with those who enjoy the theming, but you can also get some decent winnings out of it too.