Home » TomHorn » The Secret of BA 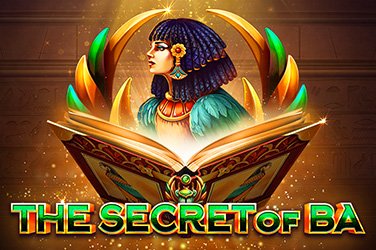 The theme of mysterious Ancient Egyptian books is a popular one at the moment, with several developers releasing a title on the subject over the last few years. The Secret of Ba is a shot at that market by industry veterans Tom Horn gaming, bringing together a number of familiar mechanics in what is a well made but unadventurous slot game.

So will your soul be on its way to paradise, or will you sink into the waters of the Nile? Let’s take a look in our Secret of Ba review.

Tom Horn have scraped the bottom of the barrel a bit with the title, but a Ba is how the Ancient Egyptians believed the soul travels from the body to the next world, in the form of a bird with a human head. As a result, this game is themed strongly around the Egyptian afterlife, set in a tomb filled with gold and treasures and featuring symbols inspired by the spells and magic used to guide the soul on to the next world. While the lower value symbols are the standard 10 – A, the higher value symbols include the Eye of Horus, the ankh and a jewelled scarab beetle. All the detailing and the symbols are rendered nicely and the graphics are very good, but none of what you see is particularly unique or different from other offerings on the market.

One interesting feature is that this game uses a cascading reels feature, what it calls a shatter so that when you create successful combinations they are broken and removed from the game to be replaced by new symbols from above. This has the potential to set off chain combinations, and for each subsequent combo, this creates you get a multiplier on your win up to 4x your stake. With bets ranging from 50p to £/€/$100 per spin this isn’t a bad start, but as winnings are capped at 500x your stake this isn’t nearly as generous as some similar slots can be. Having said that, with an RTP of 96.01% it also means you’re winning more consistently than you do in other slots, so it really depends on your attitude to risk.

Like many cascading reels style games, the main focus is the main game, which effectively gives you free spins on every round, but there is also a small free spins feature included as a bonus game. Landing three sacred books on the reels in one round grants you ten free spins, which use the same multiplier feature as the base game to give you up to 4x. This feature can be re-triggered repeatedly by landing more books in the free spins, which is a nice touch. On top of this, the addition of a magical expanding symbol randomly chosen at the beginning of the round means you’ll get one of the symbols filling a whole reel when it lands, greatly boosting your prize potential.

The Secret of Ba slot game is a solid entry into the popular Book Of- genre that has taken the world of slots by storm, but it doesn’t add a huge number of new mechanics into the mix. With well-rendered graphics and good design, it’s certainly nice to look at, and the cascading reels mechanic is a nice touch, but with a low cap on the potential winnings it’s not the most rewarding cash wise.