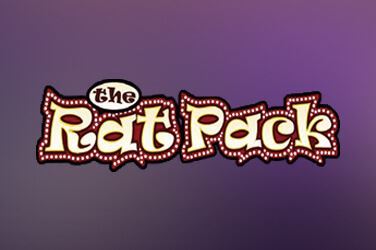 The real life Rat Pack may well be some of the coolest people to have ever lived and got their name from their debauched, yet classy, exploits in Las Vegas. This Rat Pack is a little more literal, in the sense that they are actual cartoon rats, but there are a few recognizable faces in this hairy bunch all the same, and it’s not hard to pick out ol’ blue eyes himself, Frank Sinatra.

Millions of dollars and a license to party kept the Rat Pack going in the 50s and 60s, but can this slot keep you entertained and rich like them? Let’s find out in our Rat Pack slot game review.

Rat Pack takes us to the place that the real-life Rat Pack were most happy, the Las Vegas stage, thanks to some cute cartoonish art that represents the lights and glitz of a Vegas show behind the reels. The fun continues on the reels too, where cartoon rat representations of Sammy, Frank, and Dean perform for the crowds alongside showgirl rats and a rat pianist. Unfortunately, the lower value symbols are represented by the generic 9 – A, but even these are adorned with musical instruments like trumpets, guitars, a double bass and a tambourine. It’s also a shame there’s no theme music to go with the game and little in the way of animations, but the bright colours and fun atmosphere still make it a joy to play.

There are a couple of interesting mechanics at work in the Rat Pack slot game, which utilizes a four reel and five-row setup with 30 pay lines and a betting limit of £/€/$75 per spin. On top of this, there is also a multiplier bonus symbol that acts as a sort of scatter and applies that multiplier to wins that you make with it. All these nice goodies add up, and that’s probably why the RTP manages to sit relatively high at 96.14%, and that’s before you’ve even tried your hand at the bonus game! Activate this by landing three or more gold disk scatters to kick off the bonuses, though also remember there is a second wild represented by the game’s logo that can pay up to 5000x your stake for 5 on a line.

The free spins are a little odd in this game because they’re determined by falling wilds, which is what the gold disc scatters become during the bonuses. You’ll keep getting free spins as long as there is at least one gold disc on the reels, and they move downward one row with each spin you make, so you could end up getting loads of them.

Rat Pack is an interesting game with a fun concept, and while the game doesn’t look all that promising when you take a look at the pleasant but cartoonish graphics, you’ll soon be impressed by the mechanics. Not only are there some great prizes to be won, but there is also a lucrative free spins round that uses an interesting method of giving you more and more spins one after another.