Home » Microgaming » The Phantom of the Opera

The Phantom of the Opera Game Review 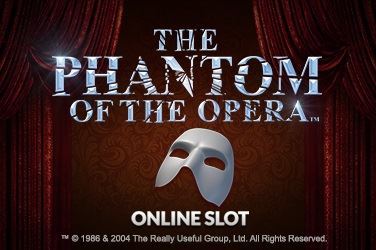 Who says there’s no room for romance in slot gaming? If you’ve got a soft spot for the soppy stuff, why not play a game based on one of the great tragic romances of fiction, The Phantom of the Opera?

This slot is heavily based around the 2004 movie adaptation of the classic novel turned West End show made famous by Andrew Lloyd Webber, and incorporates many stills and songs from both, but does this slot get a standing ovation or booed off stage? Let’s take a look in our The Phantom of the Opera review.

It should be fairly obvious from what we’ve said so far that The Phantom of the Opera will appeal most to fans of the movie, or at least the musical. Not only are all of the symbols related to one or the other, but there are also songs from the show incorporated after every win as well, so fans will be in heaven but it may not appeal as much to people not familiar with the story. Low-value symbols in this slot are represented by props from the show such as the phantom’s mask, opera glasses, a rose and a bottle of perfume. High-value symbols are represented by stills of characters from the movie, including Rose and the phantom, who are the highest paying of all the normal symbols.

There are a couple of interesting mechanics at play in this game, including a few random bonuses in the main game, as well as a 243 ways to win mechanic that makes it possible to generate big wins. On top of that, there are also random wilds that expand and provide instant wins, all of which can be won on one spin. One slightly disappointing element is the betting range, which tops out at £/$/€15, so you have to be patient when it comes to generating really big wins. The RTP tops out at 96%, so the money is there, you just have to work on it.

The bonus features can be activated by landing three scatters, which gives you a choice of three bonus games that you can play. Two of them are variations on the same free spins game, giving you 10 spins with random wilds thrown in which can help you generate even bigger wins. The third game is a standard pick and win feature, where you turn over symbols to reveal prizes until you run out of picks. While there are quite a lot of bonus features to play with the jackpot isn’t all that great, topping out at 800x your stake, so once again you’ll have to be patient to create a big kitty.

The Phantom of the Opera slot game is a treat for fans of the movie or the musical, thanks to its liberal use of songs and images from both, but this might not appeal to non-fans. The game is also pretty slow to generate big wins, thanks to fairly low jackpots and wagers, but there are enough different bonus games to keep you playing until you make it big.