Home » Microgaming » The Heat Is On

The Heat Is On Game Review 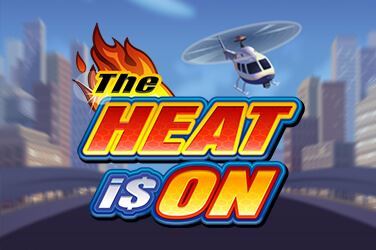 It’s time for another game of cops and robbers in this crime-themed slot, but probably not as you’ve ever seen before! The Heat Is On certainly lives up to its name, and for once that’s not a reference to the amount of danger that the criminal is in because the revealing outfits the cop and the burglar wear bring more than enough heat on their own.

This campy, fun crime caper owes more to Miami Vice than it does to a gritty modern thriller, but will it make you rich? Let’s take a look in our The Heat Is On slot game review.

The Heat Is On slot game certainly has a flair for the dramatic, and from the start, you’ll be embroiled in a police chase behind the reels as helicopters weave between skyscrapers on the hunt for this criminal menace. The fun, driving soundtrack only adds to the excitement, though it definitely feels more lighthearted than anything else. That feeling will be confirmed when you see the symbols, which include the criminal’s superbike, the cops’ Lamborghini, a ticking bomb, a helicopter and a cop and robber whose outfits leave little to the imagination and probably aren’t in the regulations for any police force. The cop even sports a set of fluffy handcuffs, to further complete the image. So this is a slot that doesn’t take itself too seriously, but you’d think they could at least have designed some low-value symbols, which are just the 9 – A here.

Beyond the bombastic imagery used in the design, this slot is fairly straightforward, utilising three rows and five reels with 45 paylines to play on. There aren’t a huge number of features in the main game except for the two wilds, represented by the cop and the burglar, which effectively double your chances of winning the top prize of 2500x your stake if you land five of either. They both do the same thing, substituting for other symbols, but the fact there are two of them makes a big difference. The RTP is good but nothing special, coming in at 96.01%, so you’ll be pleased to know that there is a nice bonus feature on top of this to keep you interested.

Landing three of the bank scatters will grant you up to 20 free spins with five symbols, which is pretty generous, but it gets even better when you discover how easy it is to re-trigger the bank free spins within the game. You can double your number of free spins by landing two further bank images on the second or third reel, while if you land two on just the second or just the third reel you can multiply that number by four!

The Heat is On slot game won’t be winning prizes for gender equality anytime soon, and we must say that the whole game feels like a bit of a throwback to the days when slots were a boys’ game, but old school imagery aside this slot is fun and funny in equal measure. There are some great payouts, especially from the double wilds, and the free spins just keep on coming if you get lucky.