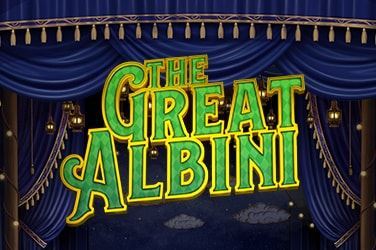 It’s not often you see a truly original concept behind a slot game, but of any developer, you’d trust Microgaming to do it, and that’s exactly what you get with The Great Albini slot game. Created in conjunction with Foxium, The Great Albini takes us back to the roaring 20s when the stage magic of the Vaudeville era was at its height.

Amazing graphics and incredible animations bring the master illusionist to life, but will you pull a rabbit from a hat or is this all a big trick? Let’s find out in our The Great Albini review!

Just like a real illusionist, the great trick this game pulls is to make a rather simple set of mechanics look spectacular with smoke and mirrors. The slot itself looks great, taking place on a suitably atmospheric looking theatre stage, while the whole production is directed by The Great Albini himself to the left of the reels, who continuously performs tricks, levitates cards, produces things from thin air and generally adds to the magical vibe. The lower value symbols are represented by the standard 9 – A icons, but the higher value symbols are the tools of the magician’s trade: The cups from a cup and balls trick, the knives and target from a throwing knives act, a canary in a cage, Lily the magician’s assistant and finally The Great Albini himself.

The animations that accompany just about every event in this game look great too, and whether it’s symbols disappearing in puffs of smoke or showers of petals when they are matched or Albini’s glowing playing cards that he lifts with his magic, there’s always something going on. It’s a bit less exciting under the hood, where 50 paylines and a betting range of £/€/$0.25 to £/€/$30 doesn’t exactly set the world alight, but with a max win of 4,000x your stake and a generous RTP of 96.6%, there’s still plenty of money to be made.

For a game that looks this dazzling, it’s slightly disappointing that there are only a couple of basic free spins bonus rounds, but they’re still a lot of fun to look at. The first actually happens in the base game, activated by filling the middle reel with mystery boxes, which look like a trunk bound in chains. The middle reel is frozen while the rest of the reels continue to spin, becoming sticky if more boxes land on them. You get three more re-spins to land as many boxes as you can, before The Great Albini magics up a card with a random symbol on it, transforming all the boxes on the reels into that symbol. If you manage to fill all the reels with Albini symbols in this way, you win 1000x your stake!

The main free spins bonus is activated simply by landing there free spins symbols on your middle three reels. This makes the grid bigger, expanding it to 5×6 to give you a greater chance of winning, as well as 12 free spins to play with. The randomly activated Lily feature sometimes comes into play, in which the assistant wraps herself in a curtain and disappears, showing up as a wild taking up a whole reel. She then transforms into a stack of wilds that double your wins made via that reel.

The Great Albini undoubtedly looks great, combining great-looking visuals with a series of fun and engaging animations that really help to elevate this slot. However, while it looks good, just like a stage illusionist there’s the feeling that these visual tricks are disguising a fairly simple game without many original features.