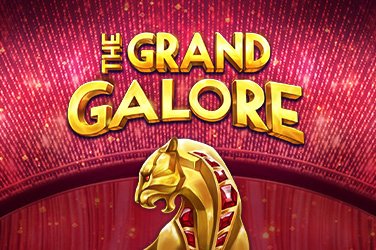 Enjoy a huge 1,000,000 ways to win in The Grand Galore Slot Game by ELK Studios. This opulent and glamourous slot aims to dazzle players with a grand gaming experience. It has a heavy focus on continuous wins which award respins with extra symbols to provide more ways to win.

The game begins with a six reel, four-row layout, offering 4,096 paylines, but each reel can expand to present up to 10 rows. If this happens, you’ll be playing with a magnificent one million winning ways.

The Grand Galore Slot Game has a Return to Player (RTP) of 96.00%, with a medium to high variance and a 22.9% hit frequency, so almost a quarter of all spins should result in a win

The Grand Galore Slot Game has a tasteful and glamorous design, with a 1930s look and a calming soundtrack. The symbol set is pretty simple, with the usual Royals alongside four glistening gems and a panther encrusted in jewels, which is the group’s most rewarding of the group. Look out for the gold W symbol, as this acts as the wild within the game and substitutes for any other symbol except for the bonus symbol.

The layout is fully optimised for all devices, so you can play on desktop computers, tablets, or mobiles and still enjoy the impressive graphics and animations.

Each time you land a winning combination in The Grand Galore Slot Game, you’ll see all contributing reels expand with one extra row. When this happens, all winning symbols and the newly added symbol from the expanding reel will respin.

The Stacked Respin feature then activates, with any re-spinning symbols adjacent to one another displaying the same symbol. This can continue until each reel has expanded to a maximum of 10 rows, leaving you with an impressive one million winning ways.

Keep an eye on the second and fifth reels during respins, as they can randomly become in sync, displaying the same symbols to result in big wins.

The Grand Galore Slot Game’s key attraction is the bonus game, triggered when three to six bonus symbols appear on the reels. Three, four, five, or six bonus symbols will result in 10, 15, 20, or 25 free spins respectively.

Once the bonus game begins, the Grand Respin feature will come into play after every fifth win, expanding reels in the process up to a maximum of 10 rows. There’s the chance for up to a total of 50 free spins if you land a further three or more bonus spins and retrigger the game.

The Grand Galore Slot Game is a simple yet rewarding game, with the chance to win big payouts through both the Synced Respin feature and the bonus game. The expanding reels are the key to activating further boosts and working your way to up to successive wins, ultimately worth up to an impressive 10,000 times your stake.