The Good, The Bad and The Ugly Game Review 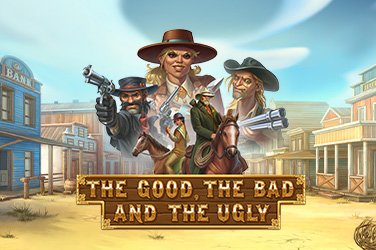 Perhaps one of the most iconic and influential Western in history, The Good, The Bad and The Ugly has it all: The mysterious anti-hero with no name, the iconic soundtrack and the hardscrabble desert town in need of rescue from some low-down desperados.

It’s no wonder that it’s also been the theme for a few slots over the years, though ironically none of them have looked this good. But is this tale of the Old West more than just a pretty face? Let’s take a look at our The Good, The Bad and The Ugly slot game review.

There aren’t many Wild West clichés that don’t get a run out in this slot, which sticks nice and close to the romantic stereotypes of dusty main streets, run-down shacks and shady-looking saloons. The background to the reels is one such street, and this slot makes use of some lovely detailed artwork to bring it to life. The low paying symbols are the standard 9 – A in a Wild West font, while the high-value symbols include a Sheriff’s badge, a six-shooter surrounded by bullets, a safe, and a stack of gold bars. The game is alive even behind the reels, and even in this dead-looking town the noose swinging from the top of the reels twists in the breeze, an eagle soars overhead and the wind rustles the posted bills which identify the pay tables. The iconic trill from the movie’s soundtrack makes a frequent appearance too, which will please the fans.

Despite the set dressing in this game, the actual mechanics are pretty straightforward, with five reels and three rows while there are 10 pay lines to play on. This isn’t a game for high rollers, with a maximum bet of just £/€/$20 and a top possible jackpot of £/€/$1000, but then not every game has to offer life-changing sums, and sometimes it’s just fun to make a bit of cash and have a laugh in the process, which this game delivers handsomely. It’s advised to bet high because of the distinctly average RTP of 95%, but thanks to the varied bonus round there are lots of options for maximizing your winnings.

The bonus rounds in this game are nice and creative, with each one being themed around the title characters: The good, the bad and the ugly, which you can activate by landing three or more skull bonus symbols. There are five separate wilds in this game, each bearing the face of a different shady looking character menacing or protecting the town, and while they don’t do anything except the usual substitution job that wilds do, they add some colour to the bonuses. In the first bonus The Good you get ten free spins and sticky wilds that are held on the reels where they land until the end of the spins. In The Bad, you’re helping the villains blow up the bank, and collecting sticks of dynamite on the reels can award up to 20 free spins and a multiplier of a whopping 50x. Finally, The Ugly is nice and simple, just an instant win of up to 100x your stake.

The Good, The Bad and The Ugly slot game looks great and is obviously having a lot of fun with its theme, hamming up every aspect of the Wild West setting like an extra at a theme park. It could pay better, but not all players want to risk their savings on each spin, so this is definitely a lot of fun for low rollers and for people who just want to add a little jackpot here and there to their bank balance.