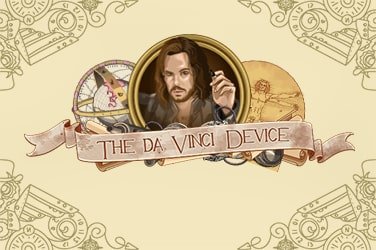 There’s something so endlessly intriguing about Leonardo Da Vinci and the works he’s so famous for, and we think that’ll be the case throughout the rest of history. From fascination surrounding the man himself to the mystery that has spawned so much publicity in pop culture, there’s a lot to get through.

Today, we’re going to take a look at 1×2 Gaming’s The Da Vinci Device slot game and see what kind of legacy they attempt to leave him.

From the word go it’s clear to see that the design of The Da Vinci device slot game is unlike anything we’ve ever seen before, which of course, serves as an immediate appeal. There is a standard 5×3 reel layout but with 243 ways to win, you shouldn’t judge this particular book by its cover – because there’s plenty to get excited about.

In addition to the standard playcards we also get some wonderfully themed symbols such as the iconic Mona Lisa, an amulet, Polyhedron, a globe and even a self-portrait.

The return to player (RTP) percentage, is as we all know, an ever-present member of the slot community and The Da Vinci Device slot game cannot escape that. The reported RTP comes in at 96%. That’s just below the standard industry average but with medium volatility, players can anticipate a steadier stream of smaller wins if they stick with the game for long enough.

You don’t have to break the bank to get underway with a minimum stake of $/€/£0.25 and an appealing maximum of $/€/£100, with the possibility of winning 1,600x your initial stake also being thrown in there for good measure.

Visually speaking this really is a gorgeous slot, if only because it feels like a blueprint is being laid out right in front of us – and that alone feels pretty unique.

The Vitruvian Man is the wild and can substitute itself in place of all other symbols outside of the scatter – of which there are five. Each of them can only land on one symbol each and together they will form a cryptex. If you can land between three and five pieces of them you will trigger the Free Spins feature, potentially handing you up to 16 free spins and maybe even a multiplier of 4x.

Above all else we’d give The Da Vinci Device slot game the distinction of being classy, which is a hard balance to strike in this industry. From the decent winnings to the unique nature of the gameplay, there’s a whole lot to enjoy.

Some may find it a bit tedious and prefer to go for something that is going to get their engine running a bit more, but The Da Vinci Device makes you really think about the man himself and appreciate the legacy that he has left behind. If that doesn’t get your mind racing, then we’re not entirely sure what will.