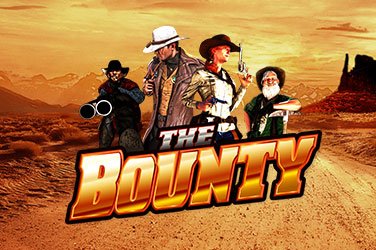 Powered by Microgaming in conjunction with Snowborn Games, The Bounty Slot Game features five reels, three rows and 15 paylines, with an impressive jackpot of up to 7,500 times your stake up for grabs. You can enjoy the same gameplay experience across all devices, from laptops and desktop PCs to touchscreen tablets and smartphones, thanks to the fully optimised design.

With a Return to Player (RTP) of 94.00%, The Bounty Slot Game is considered a medium volatility game.

The Bounty Slot Game has a Wild West theme, the silver-edged reels sit in front of a clapperboard town, with the hazy desert sky in view in the top half of the screen. The accompanying soundtrack supports the overall theme and works well to create an exciting atmosphere throughout the gameplay.

Symbols-wise, you’ll find the usual set of low-paying playing card royals – J, Q, K and A – alongside four characters who act as the higher value symbols. There are also silver and gold sheriff star wilds, with the latter doubling any wins it helps to form. In addition, you’ll find a Bounty Jackpot Bonus symbol that can appear on the fifth reel and an Ambush Bonus symbol that can land on the third, fourth and fifth reels.

The Bounty Slot Game’s minimum bet sits at $/€/£0.15 per spin, with the highest possible wager limited to $/€/£11.25. The relatively low upper bet limit will likely deter most high rollers, however with a jackpot worth up to 7,500 times your total stake up for grabs, you’d have the chance to pocket a prize of up to $/€/£84,375.00 if playing at this highest possible stake.

Trigger this by landing the stacked Bounty Jackpot Bonus symbol in full view on the fifth reel. You’ll be rewarded with ten free spins, throughout which you’ll need to collect six matching ‘Wanted’ posters to win a jackpot prize. More than one jackpot prize can be won, and you’ll double your prize if you find a golden ‘Wanted’ poster.

Activate this round by landing three of the Ambush Bonus symbols across the third, fourth and fifth reels, resulting in eight free spins that start with a double multiplier. If you land a bullet during the Ambush Bonus round, an extra spin will be awarded, while the dynamite symbol will increase the win multiplier by one.

The Bounty Slot Game is a fun, action-packed slot that takes you on a Wild West adventure to uncover big prizes. The two bonus features each offer the chance to significantly boost your prize pot thanks to the combination of free spins and multipliers. Look out for those dynamite symbols and golden ‘Wanted’ posters to see substantial wins.