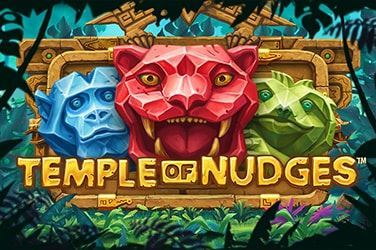 It’s time for us to begin another journey and, seemingly, be welcomed into the jungle. The Temple of Nudges slot game by NetEnt is set in the wilderness down in South America as players attempt to uncover the many secrets that this slot holds.

Today, we’re going to take a look for ourselves and see what lies beneath the surface.

The stone idols that we’re greeted with make up the core of the story within the 5×3 reel layout which, it must be said, does help all of the symbols to shine. There are 243 ways to win in the Temple of Nudges slot game but as is so often the case, there’s a whole lot more of the story to tell.

The usual playcard symbols are put to one side in favour of some stone-influenced themed symbols – including low suns, towers, armadillos, sloths, monkeys, cougars, birds and snakes, with the cougar being the most valuable of them all.

The return to player (RTP) percentage should be taken into consideration by any and all players who are looking for a thought-out slot experience, and that’s also the case for the Temple of Nudges slot game. The reported RTP comes in at 96.03% which is placed below the standard industry average but with medium volatility, you can probably expect a steady stream of smaller wins.

Players can get the ball rolling with a minimum stake of $/€/£0.25, and if they’re feeling lucky, they could even put down a maximum stake of $/€/£250. From there, you could be fortunate enough to land winnings of up to 2,187x your initial stake.

The design work here may be simplistic to some but we think it’s crisp, to the point and links in nicely with the theming – and the soundtrack is as soothing as it is entertaining.

The all-important Nudge feature will come into play when you get a winning combination. The reels will shift one symbol down with another chance to secure a winning combo, with this process being repeated until you run out of wins. In addition to that, you’ve got the Respin feature where all symbols that are the same as the winning symbol stick to the board, with other symbols respinning.

The Temple of Nudges slot game by NetEnt has a certain respectful edge to it that makes it quite an addictive slot, if only because it doesn’t pretend to be anything its not. The winnings are solid if unremarkable and the bonus features don’t really give us a lot to work with, but the theming has been done really well and visually, it’s very appealing.

Sometimes you don’t have to hit all of the right notes in order to make a slot a success, and while Temple of Nudges has some work to do, we’d still recommend that players give it a test run – if they’re brave enough to venture into the jungle, that is.