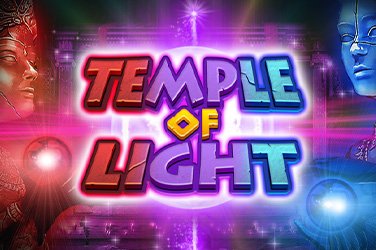 Powered by Inspired Gaming, the Temple of Light Slot Game transports you to an ancient world of temples and features five reels, three rows and 20 fixed paylines, with the chance to win up to 5,000 times your stake. With a fully optimised design, you can enjoy playing this game across all devices, including laptops, desktop PCs, touchscreen tablets and smartphones.

With a Return to Player (RTP) of 95.51%, the Temple of Light Slot Game is considered a medium volatility game.

The Temple of Light Slot Game has a pretty detailed design, with two ancient statues sitting on either side of the reels. The graphics are high quality, with the reels bordered by ornate columns. The accompanying soundtrack supports the overall theme and brings it together while adding an element of excitement to the gameplay experience.

In terms of symbols, you’ll find the usual set of low-paying playing card royals – 10, J, Q, K and A – alongside the plant, earth, fire and air runes and the red-headed explorer. The latter is the most rewarding of the standard symbol set.

The Temple of Light Slot Game’s minimum bet sits at $/€/£0.20 per spin, with the highest possible wager limited to $/€/£100.00. With a varied range of available stake options, both high and low rollers should be able to enjoy the game.

The Temple of Light Slot Game presents an abundance of bonus features, as we’d expect from an Inspired Gaming slot.

Before a spin, the statue to the left of the reels can activate, triggering the multiplier wilds bonus game. Any wilds that then land in view on the upcoming spin will transform into multiplier wilds.

This works similarly to the above feature, but refers to the statue on the right of the reels activating before a spin. Any wilds landing in view on the next spin will transform into expanding wilds and fill the reel that they land on.

Trigger this by activating both statues at the same time. On this spin, all wilds will expand and have a multiplier attached to them. The multiplier value can be worth up to ten. This feature can only occur during the free spins round, but it can result in huge winnings if you manage to fill all reels with wilds.

Option one: You’ll be rewarded with 12 free spins, and at least one of the statues will activate on each spin. You can retrigger the round by landing a further three scatters on the first, third and fifth reels, resulting in a further 12 free spins.

Option two: You’ll be rewarded with between three and six free spins, but both statues will activate during each spin, resulting in increased winning potential. You can retrigger this round by landing another three scatters on the first, third and fifth reels, too.

The Temple of Light Slot Game is an entertaining slot, packed with bonus features that make for an exciting gameplay experience. The free spins round can be particularly lucrative no matter which option you choose. Overall, this is a superb slot for all player types.