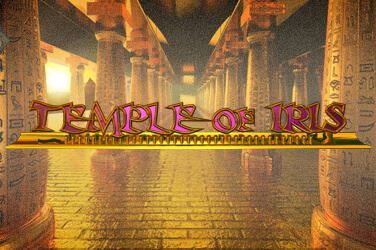 Ancient civilisations have been a rich source of inspiration for slots developers over the years, and Temple of Iris, by Eyecon, continues that trend.

Eyecon was founded originally as a video games company, back in 1997, but they soon turned their attention to the growing online casino slots sector and haven’t looked back! Since launching their first slots game in 1999, they have developed into one of the industry’s most innovative and popular developers, with offices in Australia and Alderney and a global reach.

Temple of Iris has been one of their most successful slots. It’s a 5-reel game with a user-friendly 25-paylines that combines both Roman and Egyptian myths and symbols and packs in some big prizes along with free spins, and a satisfactory 95% RTP. The game itself is focused on the Messenger of the Titans, an errand-girl to the gods, who serves the rest of the Egyptian-themed pantheon.

The game is played by setting a stake in the range of $/€/£0.01 and $/€/£0.50, making this a good gaming option for those who prefer to play with small stakes. You can adjust the number of paylines you use and there is also a welcome autoplay feature that makes playing even more straightforward.

The Priestess in her white gown is the game’s Wild and lining up Wilds can help you to land a big prize, with an exceptional 9500x reward on offer for landing five Wilds in a payline and even bringing up four will give you a handsome payout of 2000x. The Pyramid symbol operates as the Scatter and this can also lead to some significant wins.

The ancient civilisation theme is maintained throughout with some iconic Egyptian symbols employed, including the Eye of Horus, the Gold Cobra Cane, an Egyptian cat, Ruby Scarab and the Ankh, along with all the familiar card values. And there’s a gorgeous background to the play, along with a powerful soundtrack that does a good job of evoking the ancient world.

As well as the chance to land the payouts mentioned above, there are some big rewards to be earned on the bonus game options. If you land three or more Pyramids, you can trigger the Free Game feature, which gives you 15 spins and a multiplier of 3x for any prizes won at this time. And for those who are feeling adventurous, there’s the Gamble option which gives you the option of doubling up after each payline win. Hit it lucky with this feature and you could end up landing the maximum payout of an impressive 3,000,000 coins: a truly epic win!

Although there are games with higher RTP figures out there, Temple of Iris has stood the test of time thanks to immersive gameplay and generous bonuses, which provide a compelling and entertaining blend of prizes and excitement. If you love slots with an Ancient Egyptian theme, this is one classic of the genre that should be checked out.