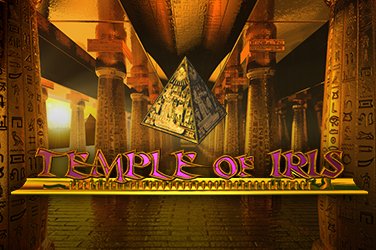 Journey back to Ancient Egypt and the Temple of Iris in this sequel to Eyecon’s popular hit, where you’ll hope to collect golden symbols to win the ultimate prize. The game has undergone a bit of restructuring since the original, and while Temple of Iris 2 lacks the progressive prizes that made the first game so popular, a couple of surprising bonuses have been added to take their place.

So will this game have you walking like an Egyptian or walking home? Let’s take a look in our Temple of Iris 2 review.

Visually Temple of Iris 2 is a slight upgrade over the original if you played it, but if you didn’t manage to catch it, expect gorgeous shifting sands, Pyramids and a mysterious camel train behind the reels. The symbols are a pretty traditional run-through of the most famous Ancient Egyptian imagery, with golden cobras, cat statues, the Eye of Horus and jewelled scarab beetles. The lower value symbols are the generic 9 – A icons, but even these have been given a stylised Arabic design to help them fit in. Winning symbols can trigger animations, which is a nice touch, while an atmospheric set of sound effects also plays when you strike it big. While they are nicely designed, the graphics are a little bit dated in comparison to the most modern games, while the animations can be a little jerky too.

Temple of Iris 2 is a traditional five-reel, three-row slot with 25 paylines and a small betting range of between £/€/$0.1 and £/€/$12.50 per spin, so you’ll need to be hitting those big combos regularly to rack up the cash. The highest regular payout from a symbol is the Iris wild, where five on the reels pays out 380x your stake. The wild also doubles the win of any combo it helps to complete. However, the introduction of instant wins makes a big difference to the basic game. Any symbol can have a golden background in the game, and if two golden symbols land on reels 1 and 5 the player is instantly rewarded with a prize up to 50x their stake. It’s a bit of a random reward, but it makes a big difference to your kitty if you win. As a result, this game is considered to be high variance and attracts an RTP of 95.4%

Unlike the first Temple of Iris, this game relies less on its bonus games to deliver the big prizes and more on the instant win feature, but Temple of Iris 2 still has a nice little free spins round that players will enjoy. Landing three or more golden pyramid scatters on the reels brings up the bonus round which grants 15 free spins and trebles any prizes you win for its duration. You can also re-trigger this feature during its run-up to 15 times, so there is the potential for a truly huge number of free spins to enjoy.

The Temple of Iris 2 slot game is a worthy successor to the original and provides enough upgrades and new features to justify a return to the mysterious sanctuary. If this is your first time playing the series you’ll be impressed at the solid graphics and attention to detail, with some decent prizes available too, though it doesn’t have any standout features that make it a must-play unless you adore the setting.