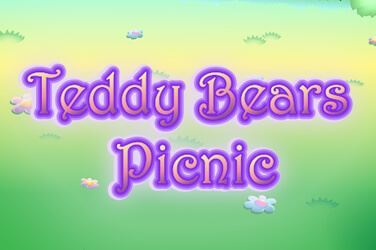 The Teddy Bear’s Picnic slot game is one of the older creations from the team at NextGen Gaming and one which has a very uplifting feel to it. It was released to the market as far back as April 2013 so it has been available for play for quite some time.

The colours involved in the Teddy Bear’s Picnic slot are vibrant and bright and the theme tune is catchy. You can play this game on all desktop, mobile and tablet devices.

The Teddy Bear’s Picnic slot game is based on the age old song by Anne Murray, where the characters are set in the woods which is clear to see behind the reels, while to the side of them is the picnic itself. This is a pleasant and fun slot which has five reels and as many as 25 paylines in play.

There are plenty of icons on the reels with the lower paying ones being the regular card symbols – 10, J, Q, K and A. The higher paying icons include three bears, the mum, the dad and the baby, as well as a big cake and a hot drink. There is a Wild icon which is the honeycomb block while the Scatter is the picnic basket. This is a key symbol within the game.

Teddy Bear’s Picnic is not blessed with a huge number of features but there are enough to keep the players interested. The first of them is the Teddy Bear Wild feature. This is only a small feature but after a random spin you could see a teddy bear appear over the reels. He will throw some honeycomb at the reels, turning the place it hits into a Wild, potentially providing more wins.

The main feature is the Free Spins feature. If you get three or more of the Scatter icons across the reels the Free Spins feature will be activated. You are awarded eight free spins and the extra perk of this feature is that any Wild icons that show up remain in place until you have finished your free spins. Unfortunately this feature cannot be retriggered.

The last feature in the Teddy Bear’s Picnic slot is the Gamble feature. You can either double or quadruple any win by risking it to guess the identity of a playing card. It is a gamble though and if you lose your win disappears.

The Teddy Bear’s Picnic slot game comes with a RTP rating of 95.35%, which is a little below the average for a slot game, which may not appeal to the player.

The Teddy Bear’s Picnic slot game doesn’t sound much with the relatively restrictive features but it is a fun and engaging slot game which has really striking graphics and sounds that will keep you hooked for a while. Although there aren’t a huge number of features, they can be activated regularly which is a positive. For entertainment and an enjoyable gaming experience, we think Teddy Bear’s Picnic is well worth a try. You won’t be disappointed!