Home » Microgaming » Tarzan and the Jewels of Opar

Tarzan and the Jewels of Opar Game Review 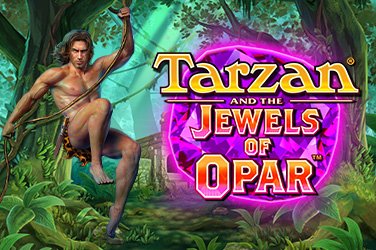 Move over lions and tigers, there’s only one King of the Jungle and he’s got two legs, not four. One of the most famous movie creations of all time, Tarzan of the Apes has been translated into countless books, movies and video game adaptations, and he’s no stranger to the slots either, but makes way for his newest adventure: Tarzan and the Jewels of Opar.

This slot is actually based on one of the Tarzan books, but it’s all action thanks to some fun bonuses and some exciting jungle adventure. But is this slot top of the tree or is it just monkey business? Let’s take a look at our Tarzan and the Jewels of Opar slot game review.

We’re on the trail of a lost African civilization in this slot, as Tarzan tangles with a tribe dedicated to protecting some mysterious and valuable jewels from all who would try to take them. Tarzan is more interested in protecting his jungle home and the lovely Jane than getting rich, but the same can’t be said for the evil-looking hunter who is hell-bent on pillaging the lost city of its riches. In true Tarzan style, the background to the reels is a lush and sinister-looking jungle, while the reels themselves are the blocks of a ruined lost city. The low-value symbols are the generic 9 – A, while the high-value symbols are the characters from the story: Tarzan, Jane, the hunter and the African princess La. There isn’t much of a soundtrack to this game, but animated leaves swirl in the background and the jewels are appropriately grand when you land them in a flash of purple light.

We’ll start with the elephant in the room when it comes to gameplay: Those massive purple gems on the left of the reels. These are the Jewels of Opar, and as you can see they are the real paydirt in Tarzan and the Jewels of Opar, generating wins of up to 5000x your wager when you land nine of them on the reels. If you can tear your eyes away from that prize for a minute you’ll see that the rest of the game mechanics are pretty straightforward, giving you five reels and three rows with 20 pay lines to play on and a maximum bet of £/€/$20. The RTP is also pretty high at 96.38%, though you’ll need to get into the bonuses to really take advantage of that figure.

There are a couple of extra features that stand out in the Tarzan and the Jewels of Opar slot game, one of which is completely random, when Tarzan swings across the screen and dumps wilds onto the reels. Usually, it’s just a handful, but sometimes it can be as many as 15 to really spice up the spin! The second is activated by landing those purple jewels, which are also the scatter, which lets you spin a wheel to win as many as 30 free spins with a 10x multiplier!

It’s always fun to see a big-screen legend making an appearance in a slot game, but Tarzan and the Jewels of Opar is more than just a shameless cash-in on a famous face. Thanks to some fun bonuses and excellent visual design, this slot has more than earned the right to be a fun and interesting experience all on its own. And who can resist those amazing purple jewels and their massive payouts?