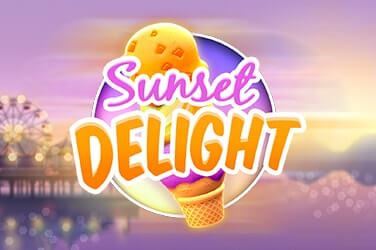 Whether it’s the depths of winter or the height of summer it can be difficult to resist a good ice cream cone, and you won’t be able to resist the many that will come your way in the Sunset Delight slot game by Thunderkick.

While this is a sequel to an earlier game of theirs, fans and newbies alike will be struck by the originality of this slot, which truly offers something different to others on the market. So will you be standing tall and frosty in the summer sun, or will you be a sad puddle? Let’s take a look in our Sunset Delight review.

There’s a little bit to explain about this slot, but let’s start with the basics. It’s sunset in the summertime at your favourite seaside fairground, and you can see the gaudy Ferris wheel on the pier backlit by the setting sun. In front of you are three ice cream cones, which are your reels, stacked with scoops three high. Having ice cream scoops in place of symbols is a nice touch in a genre that often plays it safe, and the value of the symbols is represented by their decoration. The plain-coloured scoops are the low-value symbols, while the ones decorated by sprinkles are the higher value symbols. Spinning the reels adds three more ice cream scoops to the cone, paying out on any combos, then the scoops are eaten and replaced by new ones on the next spin.

The whole game is nicely rendered in 3D graphics, which helps to bring the scene to life, with a gorgeous backdrop behind and some inviting looking sweet treats on the reels. There’s even a relaxing soundtrack in the background that’s sure to hit your nostalgia buttons if that’s your style. While this all looks very cool, the payouts at this stage are less impressive. The highest payout in the base game is a miserly 15x your stake, which you get by landing three wilds or three chocolate scoops. While the betting limits are fairly high, from £/€/$0.10 to £/€/$100, that’s still not ideal when many games pay upwards of 1000x in the base. This all adds up to an RTP of 96.3% which is fairly average.

So you’re doomed to be a low roller in this slot? Not so fast! This is a slot that rewards your progress in the bonus rounds, so be prepared for some seriously tasty multipliers if you get that far! Activating the bonus is as easy as landing three scatters, represented by a scatter wafer sticking out of the normal scoops. A large round multiplier wafer will appear to the right of the screen, containing multipliers from 1 to an incredible 100, and you’ll get five free spins to start you off. Instead of disappearing the scoops will keep on stacking up into the night sky, and you’ll see other wafers stuck in the scoops that offer +1 step and +1 spin. These do exactly what they sound like, with steps moving you up a multiplier level and spins giving you an extra free go. Using this feature you can quite easily progress up to the big guns of 25x, 50x and even 100x multipliers without breaking a sweat.

This is an inventive and cool looking slot that brings some interesting visuals and mechanics into play and should keep you entertained quite easily. It’s easy to be put off by the meagre payouts in Sunset Delight, but it’s not hard to trigger the bonus game where the real payouts are to be found.