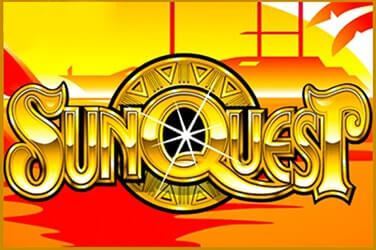 We had a bit of trouble trying to explain exactly what SunQuest is about, and the best way we could sum it up is as a kind of sun-kissed fruit machine. It’s got all the usual symbols and mechanics you’d expect from a fruit machine, but with some extra sunny symbols to spice up the action a bit.

If you’re a fan of old school and retro gaming then this is the slot for you, because it brings a lot of those retro vibes and mechanics with it. So is SunQuest a blast from the past or just old fashioned? Let’s take a look at our SunQuest slot game review!

There’s not much in the way of mystery or drama about SunQuest, so if you’re after a slot that looks like a graphic novel then this might not be the one for you, but if you’re a fan of old-style slots where there was nothing to come between you and the prizes, this might just be a great choice! This is a classic fruity, so expect to see all your favourite symbols on the reels from bells and BARs to lemons, strawberries, melons and oranges. Alongside these, however, SunQuest adds a touch of exotic class, including diamonds, gold bars and a mysterious golden medallion. Think of it as a fruity if it moved to Marbella and got a tan. You only get the most basic sound effects and there are no animations, but fans of fruit machines will love the new look.

We said that the SunQuest slot game looks a lot like a classic fruit machine, so it’s no surprise that it plays like one too: There are five reels, three rows and nine paylines, which is a little bit more than the three reels and one payline you used to get, but still fairly basic. Your maximum bet is limited to £/$/€18, which is also a bit on the low side, but with a very generous RTP of 96.92%, it’s up there with some of the best paying slots on the market. The reason for this is one of SunQuest’s biggest appeals, and it’s because you can win the maximum prize of 10,000x your bet in just one spin. This game doesn’t have any bonus rounds at all, which isn’t exactly ideal for some players, but it does mean that there aren’t any complex mini-games or hoops you need to jump through to actually win any money. In fact, the top jackpot of 10,000x your bet is available after just one spin, and all you need to do is land five diamonds and three scatters on the same spin. The diamonds are worth 1000x your bet, while the three scatters automatically double your total payout for that spin. It’s as easy as that!

While there is no specific bonus round, this game still employs a wild symbol, which takes the usual role that wilds perform and completes combos by standing in for any other symbol except the scatter.

While SunQuest isn’t exactly going to go toe to toe with the big blockbuster games on the market in terms of graphics or sound design, it’s hard to turn your nose up at an instant prize of 10,000x your stake in one spin. This game captures the fun and excitement of watching the reels spin to decide your fate and doesn’t let anything get in the way.