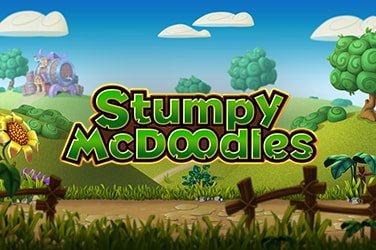 Stumpy McDoodles is an Irish themed slot game by Microgaming and Foxium, first released in 2019. While the Irish leprechaun theme is a little tired now, this is actually a pretty fun slot. The slot is themed around a leprechaun called Stumpy McDoodles and his friend, Penny McDoodles. Players spin brightly coloured reels against an idyllic cartoon landscape to match symbols and win gold.

It sounds simple, but Microgaming has packed enough features and bonuses into Stumpy McDoodles to make this slot worth a try, even if it perhaps could have done with a more unique theme.

At its most basic, Stumpy McDoodles is a pretty standard 20 payline slot where players must line up matching symbols along paylines to win cash. The game’s symbols are all themed around Ireland and leprechauns: the highest paying standard symbol in the game is Stumpy McDoodles himself, a bright ginger leprechaun wearing green and holding a tankard of beer, who pays out between 30x and 250x the bet for three to five symbols on a payline. Penny McDoodles pays up to 200x, while the shamrock will payout up to 150x the bet for five symbols.

The game is actually really fun, mostly because of the bonus features on offer to players. First up, Stumpy Random Wilds can activate at any point during the base game. A pot of gold appears and awards players magical prizes, including win multipliers between 2x and 5x and 3 to 8 wilds can be added to the reels.

If players land just two scatters on the reels, a rainbow re-spin is awarded. Other reels will hold in place while one non-scatter reel re-spins. Not only does this make space for new wins, but it increases the chances of landing a third scatter and winning free spins.

Stumpy McDoodles is a modern slot, and as such it’s been developed to run well on both iOS and Android devices. Whether you prefer to play on desktop, tablet, or mobile, you shouldn’t run into any issues playing Stumpy McDoodles out and about.

Stumpy McDoodles offers an average return to player of 96.26%, which means that for every £100 players spend on the slot, they can expect to win back an average return of £96.26, which is around average for a slot of this type.

While the Irish leprechaun theme is a little overdone, Stumpy McDoodles still manages to feel fresh in part because of the effort that’s been made to design immersive features which genuinely fit with the theme. It’s a fun slot and one that’s worth trying for a spin or two whether you’re drawn to the game’s theme or not.