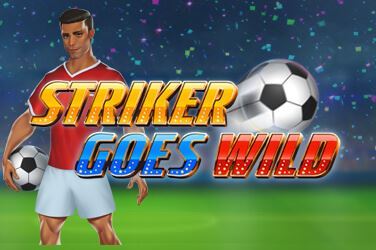 Football is already one of the biggest sports in betting, but punters will probably be more familiar with it as a live sports betting experience rather than a slot. The ebb and flow of the game, the star individual performances and the nail-biting conclusions of the game all lend themselves to the slot experience, but has Eyecon managed to get it right in Striker Goes Wild?

With decent graphics and some interesting bonus mechanics, let’s take a look at the result in our Striker Goes Wild review.

The Striker Goes Wild slot game sets out to capture the glamour and excitement of football as closely as possible using frenetic graphics and pumping music while flashing lights and sound effects all add to the atmosphere. In terms of the design, a floodlit stadium serves as the backdrop to the reels, while the symbols themselves are composed of all the football kit you’ll be used to such as boots, a ref’s whistle, goalie gloves and the goal itself. Unfortunately, the low-value symbols are simply the generic 9 – A icons, but even these have been given a flashy makeover. Everything from the fonts to the style of the menus is designed to look like the graphics used on TV football coverage, which is a nice touch to make the whole thing feel more real.

This game uses a standard slot layout of five reels and three rows, and in the base game, there’s not a huge amount more to get excited about. Betting ranges from £/$/€0.25 to £/$/€12.50 per spin, which is quite low for a modern game, though the high RTP of 96.5% suggests that there are bigger opportunities to win cash further into the game. In fact, the maximum cash jackpot on offer is £/$/€10000, but to access wins like this you’ll need to make your way to the bonus round, where this game really comes alive.

The scatter shows up quite regularly in this game, depicting a pair of cocky looking strikers duelling and playing a short animation every time it lands on the reels. Land three of these in one spin, and things really kick-off. The view pans up to the big screen in the stadium, where a short animation of football action plays, then the game switches to a bird’s eye view of the pitch and the ball is passed around before being smashed into the goal by one of the teams. Wherever the ball lands on the pitch is highlighted in gold, and at the end of the animation, all of these highlighted squares become wilds! There are 12 patterns of potential wilds in any one game, and players can regularly play with 10 or 11 of them, making for some really high value spins!

Striker Goes Wild is a good looking and inventive game that makes good use of its theme to deliver a distinctive slot, with thrills and spills in equal measure. However, some players may feel that the lack of a free spins or major jackpot round is a bit of a letdown due to the low payouts in the main game. It’s a must-play for football fans, and well worth a try for everyone else.