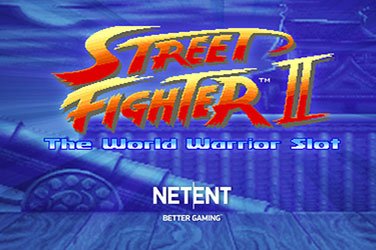 The 8-bit graphics are on display from the word go in this slot, paying tribute to the old school arcade version we all know and love. The gameplay starts off with a 5×5 reel system and a Cluster Pays function, with a winning combination being formed when four or more of the same symbols pop up in a cluster system.

The standard playcards are on display within the reels in addition to many themed symbols, including Dhalsim, Ryu, Guile, Chen Lu, Ken and many more.

The return to player (RTP) percentage in Street Fighter II: The World Warrior slot game can vary depending on the mode you’re playing in, but it is largely reported as being 96.06% – which is probably just below the industry average. However, with medium to high volatility, this really is a slot you can’t take your eyes off of for a minute.

If you’re really fortunate, you could wind up winning 7,142x your initial stake.

The old school graphics really do make this slot what it is, and you can just sense the attention to detail that has gone into this by NetEnt, which is the sort of care that every successful slot needs.

With an absolutely insane volume of bonus features, it’s near enough impossible to do justice to what Street Fighter II has to offer.

Avalanche – whenever a winning cluster is formed, the winning symbols disappear leaving room for a new avalanche of symbols.

Battles – before every base game battle you choose one of the eight available characters, before being assigned a random opponent – which impacts your ability to win more or less money.

Wild Combos – each character has a Wild Combo feature that is activated upon the Wild Gauge being filled up – whether it be placing multiple wilds on the same reels or stacked wilds.

Car Smash – smash up a car with your character and win a delightful cash prize.

Beat the Boss – this free spins feature allows you to fight the bosses and increase your odds of big winnings against Balrog, Vega, Sagat and M. Bison – going up in multipliers as you progress.

Street Fighter II: The World Warrior slot game is remarkable in every single way imaginable from the in-depth bonus features to the high prizes to the precision with which they’ve stuck to the theming. We highly recommend giving it a go – and we promise that you won’t regret it.