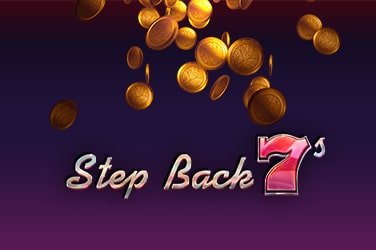 Against all the odds, slots simple three-reel slots that should have gone the way of the dinosaur are back, thanks largely to the rise of mobile gaming. Players gaming on the move want slots that are simple, good looking, easy to play and easy to understand, which is why games like Step Back 7s are perfect for this new generation of slot jockeys.

Thanks to extremely simple gameplay, but with graphics that stand up to other modern slots, could Step Back 7s have cracked the code and created the ideal game? Let’s take a look in or Step Back 7s slot game Review.

Just because a game is simple, doesn’t mean it has to be ugly, which is the philosophy Step Back 7s lives by. Anyone who knows anything about slot games will recognise the timeless classics that make up the symbols here: Grapes, oranges, lemons, cherries, bells, BAR and 7s all flood the reels in ways that you hope will make you rich, while an additional joker symbol adds a splash of modernity into the game with a bonus round. The game makes use of the graphical power of modern computers and phones to simulate an actual old-time fruit machine, complete with shiny metal surface and chrome trim, and even the hint of a reflection on the glass in front of the reels. This isn’t a game that even modern slots players would turn their nose up at.

So while the visuals may be a little fancier than you’d expect, the gameplay itself is back to basics stuff. You’ve got three reels, one row, and the only way to win is to land three matching symbols on a line. That’s it, and you’ll want to hit as many of the triple 7s symbols as you can for the top payout of 500x your stake. That’s not to say it’s the only option, because even the low paying cherries get you 10x, but with a maximum bet of just £/$/€50, you’ll want to make the most of your wins when you get them! You won’t be short-changed, though, because the RTP of 95.1% is more than usual in one of these stripped back retro games.

Amazingly for games of this style, you can even bag yourself a bonus round! The joker head acts as a wild and scatter combined, finishing combos and activating 12 free spins when you land three, a feature that can be activated up to 30 times per game! There’s also the nudge feature, which takes pity on you when winning combos fall just out of the screen, automatically spinning the reel just a little bit more to complete a winning spin.

The Step Back 7s slot game is a lovely combination between modern and old school gaming, bringing all those retro looks and mechanics to our screens while sprinkling a few modern tricks into the game as well. If you’re a fan of the old fruit machines then you’ll be right at home, but don’t worry if more modern games appeal more, not only does this game look great but the free spins will help you feel at home too!